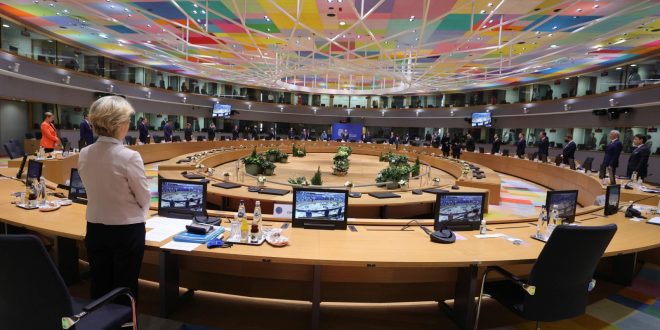 The European Union announced early Friday it has decided to impose additional sanctions on Turkish individuals and companies in the light of Turkey’s drilling activities in the Eastern Mediterranean. However, the implementation of the sanctions will be discussed at the EU summit in March 2021.

After long hours of negotiations that lasted until late Thursday, the EU shared the relevant part of the final declaration on Turkey.

According to the declaration Turkey engaged in unilateral actions and provocations and escalated its rhetoric against the EU.

There will be disappointment in Athens that the leaders did not agree to seek an arms embargo or to target entire sectors of Turkey’s economy.

The EU noted Turkey’s withdrawal of the Oruç Reis research vessel and insisted on sustained de-escalation to follow for the early resumption and smooth continuation of direct exploratory talks between Greece and Turkey.

“The European Council reaffirms the EU’s strategic interest in the development of a cooperative and mutually beneficial relationship with Turkey. The offer of a positive EU-Turkey agenda remains on the table, provided Turkey shows readiness to promote a genuine partnership with the union and its member states and to resolve differences through dialogue and in accordance with international law,” it added.

Highlighting the importance of keeping channels of communication between the EU and Turkey open, it said the EU will continue to provide financial assistance to Syrians in Turkey.

The EU invited the council to adopt additional listings based on its decision on Nov. 11, 2019, concerning restrictive measures in view of Turkey’s “unauthorized drilling activities” in the Eastern Mediterranean.

It also invited EU High Representative Josep Borrell and the commission to submit a report on the state of play concerning EU-Turkey political, economic and trade relations and on instruments and options on how to proceed.

The declaration condemned the opening of part of the abandoned city of Varosha (Maraş) and argued that U.N. Security Council (UNSC) resolutions should be respected.

It also asked Borrell to take forward the proposal of a multilateral conference on the Eastern Mediterranean.

“The EU will seek to coordinate on matters relating to Turkey and the situation in the Eastern Mediterranean with the United States,” it added.

President Recep Tayyip Erdogan said that “those logical among the EU prevented sanctions against Turkey.”

In a statement, the Turkish Foreign Ministry said among others that “certain EU member states are abusing their membership solidarity and veto rights, maximalist demands, and put forward an unfair perception of Turkey.”