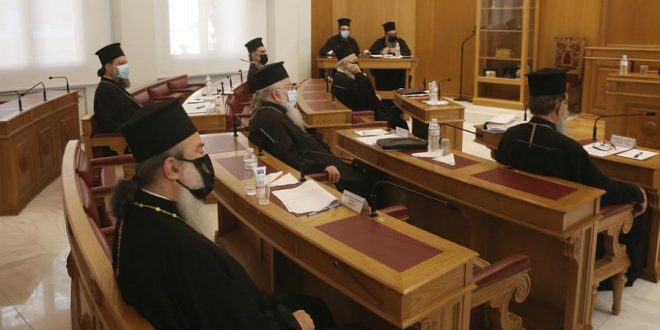 Church of Greece revolts: Open churches on Epiphany despite ban

The Church of Greece is revolting against the conservative Government and defies the ban of religious services in the presence of faithful on Epiphany on January 6. In a meeting on Monday, the Holy Synod decided to open the churches to believers despite the ban aiming to prohibit the spread of the coronavirus.

In a statement issued after the meeting chaired by Archbishop Ieronymos, the Holy Synod said, among others, that it “disagrees with the new Government measures regarding the operation of the Holy Temples” and “insists on what was originally agreed with the State on Dec 15, 2020.”

According to the agreement, the ceremony of Blessing the Waters would not be held outdoors but only indoors and churches would be open for a limited number of faithful. On Saturday, the government decided a stricter lockdown that included banning of the faithful from the churches on that specific day.

The Holy Synod “orders the Holy Temples to remain open for the participation of the faithful in the Divine Liturgy and the Sanctification of the Waters.”

The country’s top clergy calls on the government “to fully respect” the December decision”without further problems, taking into account the fact that during the celebration of Christmas and New Year” thousands of churches were opened and religious services took place with full implementation of safety measures against the spread of the coronavirus.

The Holy Synod decided further to send “a letter of protest to the Greek Government considering the dialogue as the only means of resolving the issues concerning the relations of the State with the religious communities that exist in the Greek State.”

At the same time, the statement “calls on both the leadership of the European Union and the Greek Government to take the necessary steps to ensure that a sufficient number of approved vaccines for citizens are provided immediately. No one has the right to serve other people’s purposes in the face of such an important issue as overcoming the pandemic, because the right to health belongs to everyone.”

The decisions of the Holy Synod of the Church of Greece were taken unanimously.