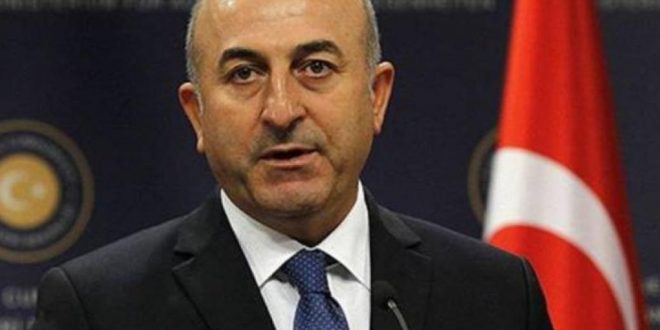 Turkish FM: Two-state deal the only way for divided Cyprus

Reunifying ethnically divided Cyprus in line with the long-established formula of federation is off the table in any future peace talks and any deal should be negotiated between two equal sovereign states, Turkey’s foreign minister said Tuesday.

Greek Cypriots strongly reject any deal that would legitimize the east Mediterranean island nation’s ethnic partition, which came about in 1974 when Turkey invaded after a coup aimed at union with Greece. Only Turkey recognizes a Turkish Cypriot declaration of independence in the island’s northern third.

Cavusoglu said it would be pointless to keep rehashing the idea of a federated Cyprus made up of two separate zones, which has failed to produce any results over five decades of negotiations. He said Greek Cypriots must come to terms with the “de facto situation” on the island and negotiate based on “sovereign equality” that would lead to a two-state deal.

“There are already two communities on the island of Cyprus, two peoples, two states. So there is a de facto situation whether they recognize it or not. This needs to be formalized,” Cavusoglu said.

Guterres said last week that the UN’s mandate in facilitating peace talks expressly refers to federation as the basis of any settlement, in line with what both sides agreed decades ago.

But he said that won’t preclude either Greek or Turkish Cypriots, or representatives from Cyprus’ “guarantors” – Greece, Turkey and Britain – from putting forward any new ideas about how to proceed.

“The fact that I stick to the mandate I received doesn’t mean that I’m not open to listen to everybody and to take the conclusions of that discussion, based on whatever the parties can come to a common view about the future,” Guterres said.

The Cypriot government is unwilling to negotiate the country’s sovereign rights with the breakaway Turkish Cypriots prior to a peace deal, and insists Turkish Cypriots will be guaranteed their fair share of any hydrocarbons revenue after an accord is sealed. [AP]