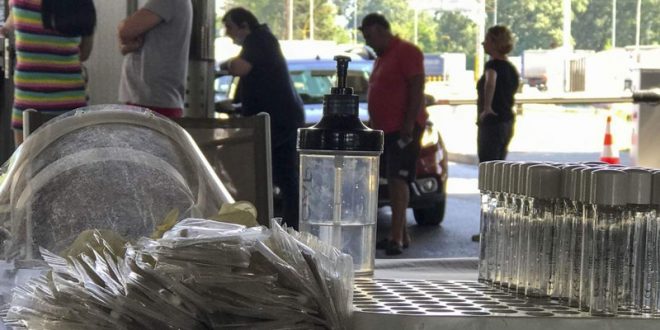 The border crossings of Nymfaia and Promachonas opened to tourists on Monday following a Joint Ministerial Decision for pilot tourists’ entry into Greece. To enter, tourists must display a negative PCR test conducted within 3 days of their attempted entry as well as undergo a rapid test administered by Greek health authorities at the border.

Prior to this pilot program, the checkpoints had been shut for months, allowing only professional truck drivers to cross the borders.

“What is taking place here, and in the period until May 14, is a crash test for when the tourism industry is expected to open completely. On April 26, when a new Joint Ministerial Decision will be published, we will be able to know all the data collected during the week,” said Thanasis Tsonis, Deputy Tourism Regional Governor of Eastern Macedonia and Thrace.

He stressed that weekly checks will ensure that the checkpoints will operate with safety and that citizens of the region will remain safe despite the opening to tourists.

All European Union citizens, as well as tourists from the United Kingdom, the United States, Serbia, the United Arab Emirates, and Israel, will be allowed to cross the borders, source told state-run news agency amna.

According to media, the first bus from Bulgaria with Greek students who want to spend East with their families arrived on Monday.

Earlier, media reported that while it is not summer holiday season with temperatures rather low for swimming, most of Serbian tourists are expected in northern Greece mostly for shopping.

Also on Monday, the Greek Civil Aviation Authority lifted the 7-day quarantine for travelers from EU and Schengen Agreement countries as well as from 5 non-EU countries.