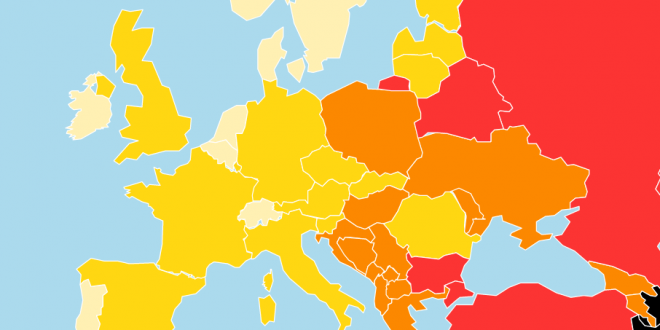 Greece is among the worst performers in press freedom issues withing the European Union, according to the annoual index 2021 published by watchdog Reporters without Borders (RSF) on Tuesday. Some European countries lead the world in respect for media freedom, yet the situation across the EU is growing increasingly heterogeneous.

The annual index, which evaluates the press freedom situation in 180 countries and territories, this year shows that journalism is “totally blocked or seriously impeded” in 73 countries worldwide and “constrained” in 59 others – together representing 73% of those evaluated. 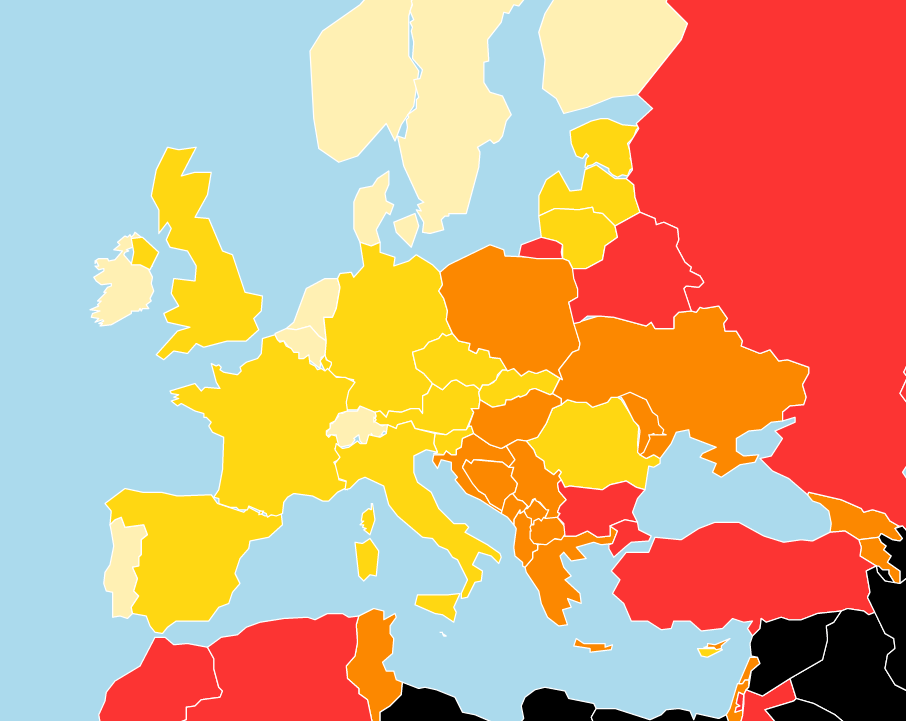 The World Press Freedom map has not had so few countries coloured white – indicating a good situation for journalism – since the current evaluation method was adopted in 2013.

The country stripped of its “good” classification is Germany, which slipped down two places in the ranking to 13th. RSF said the change was due to dozens of German journalists being attacked by extremists and conspiracy theory believers during protests against pandemic restrictions.

The EU countries rank as follows, from Finland to Bulgaria:

Compared to the 2020 ranking, Greece, where recently a prominent journalist was killed, has slipped five places in the ranks, Hungary three, Poland and Slovakia by two places and Romania and Bulgaria one place. Croatia has risen three places up the ranks.

Press freedom suffered in Greece in 2020. The conservative government led by Prime Minister Kyriakos Mitsotakis granted generous tax rebates on advertising in the media but sought, directly or indirectly, to control the flow of information closely as part of its efforts to deal with both the coronavirus pandemic and the refugee crisis.

Investigative media and media critical of the government were either omitted or were given a disproportionately small share of the advertising resulting from a controversial 20-million-euro public information campaign about the virus.

Journalists had to get the government’s permission before reporting in hospitals while the health ministry banned medical staff from talking to the media.

In February 2021, public TV channels were ordered not to broadcast video circulating on social media that showed the prime minister disregarding lockdown rules.

The police resorted to violence and arbitrary bans to hamper coverage of the refugee crisis on the islands.

In Lesbos, journalists were prevented from covering the consequences of the fire at the refugee camp in the town of Moria, while a group of German freelancers were briefly arrested while trying to cover the arrival of new migrants.

In Samos, a German documentary film crew was detained without charge and mistreated by police.

The Greek public TV channel, which is directly controlled by the prime minister although the supreme court ruled this to be unconstitutional, censored reports on the new migrant camps.

In Athens, police obstructed photo-journalists covering a commemorative event at the end of 2020 and roughed up a reporter for supposedly violating Covid-19 rules, briefly detaining him.

There is concern about the new rules for policing demonstrations, because it designates areas for the press. In April 2021, the community of Greek journalists was shaken by the assassination of the reporter specializing in crime issues Giorgos Karaivaz.

“While EU leaders often pledge their support for press freedom, the on-the-ground realities for European journalists are getting more grim,” notes politico.eu

The EU “struggles to defend values at home,” the group said Tuesday, pointing to legislation in EU countries limiting information flow, the politicization of state media and a growing number of violent incidents targeting reporters.

In other countries, especially Greece, reporters have been the victims of police violence and arbitrary arrest that have restricted coverage of law enforcement operations during demonstrations,” according to the report.

The European Commission has faced criticism for not doing enough to tackle media freedom problems across the bloc.

“The Commission, in a lot of areas — including this one — is not making full use of the instruments that are available,” said Dutch MEP Sophie in ‘t Veld, a member of the liberal Renew Europe group.

“National governments also have their responsibility, and there you see that part of the problem is that attacks on the media are actually in some cases coming from the governments themselves,” the Dutch politician said, pointing to verbal attacks, intimidation, harassment and “legislation which is too restrictive.”

But there is also pressure from some national governments to do more.

Some MEPs say that the current Commission appears unwilling to be sufficiently tough with capitals.

The Commission is trying “to hide under the bed as soon as there’s trouble, because they’re afraid of the member state governments,” in ‘t Veld said.