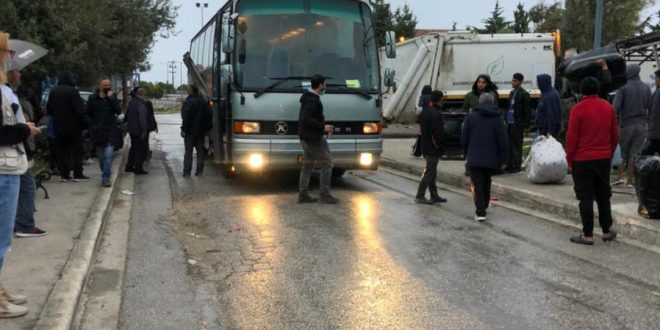 The first 54 of some 600 migrants who currently stay at the Kara Tepe reception and identification center on Lesvos island were transferred to a temporary fenced camp nearby early Saturday morning. The evacuation has been made in view of Kara Tepe shutting down in a few days’ time, the Migration & Asylum Ministry said.

NGOs like Doctors Without Borders criticized the evacuation of vulnerable people among them sick and babies that took place at 5 o’ clock in a rainy morning.

This morning at 5am, when it was still dark & while it was raining, 50 vulnerable refugees were moved by the Greek police from Kara Tepe 1 to a new tent in the hellish Moria 2.0. 1/3 pic.twitter.com/Ykb5BoJ380

In the coming days more people will be moved to undignified conditions in the new camp as the Greek authorities are closing down one of the few safe places on #Lesbos. This is just cruel & irrational! Instead of moving people to safety, the EU & Greece just do the opposite! 3/3 pic.twitter.com/L2AZm0brxi

The Kara Tepe hotspot, which was set up on public land after Moria hotspot burned down, will shut down and be turned over to the local residents. Its facilities will be moved to a new area of nearly 240 stremmas (24 hectares) at the borders to the city of Mitilini.

In addition, other facilities hosting migrants there, such as the Estia apartments, will no longer do so after the new closed control facility is built, the latest by November 2021. The new center’s capacity will be 3,000.

PS What is the point of moving people from a tent camp to fenced camp with temporary tents nearby?