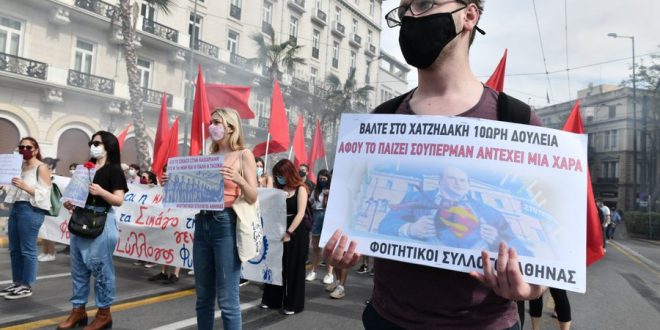 Wearing masks and carrying banners, protesters started to flock to downtown Athens on Thursday morning, as demonstrations for Labor Day were moved from May 1 (Easter Saturday) to May 6. Main demand of protesters this year is the withdrawal of the new labor bill that will scrap the 8-hour workday as well as the overtime payment.

Public sector union ADEDY, the Labor Center of Athens and the union of the Communist party, PAME, have called for this strike.

Participants are also unions and associations of workers who have been economically hit particularly from the pandemic measures.

Video: The Pnahellenic Musicians Association outside the Greek Parliament

The unions say they are “determined to resist to the government’s plans for the return to a medieval working conditions.”

Hospitals work with emergency personnel as the staff has joined the strike.

The strike has lead to transport disruptions as metro, tram and trolley buses unions joined the 24-hour strike and  commuters moved to work with private vehicles.

Air traffic controllers between 11 a.m. and 3 p.m. on Thursday.