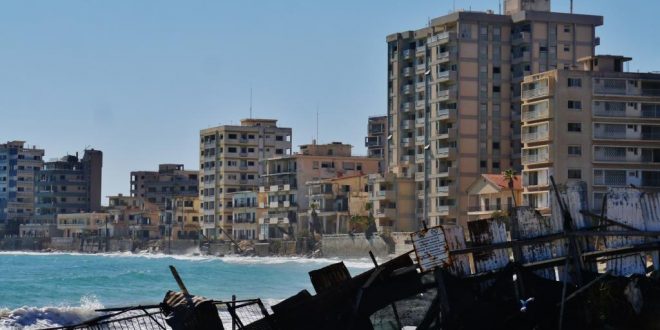 Turkish Cypriot authorities announced on Tuesday a partial reopening of the abandoned ghost town of Varosha for potential resettlement, drawing a strong rebuke from the Greek Cypriots but also the international community, the EU, the UN and the USA. Greek Foreign Minister Nikos Dendias, is rushing to the island state. President Nikos Anastasiades has called for an emergency meeting of the National Security Council. A meeting of the UN Security Countil is to take place behind closed doors.

Varosha, an eerie collection of derelict high-rise hotels and residences in a military zone nobody has been allowed to enter, has been deserted since a 1974 war split the island, notes Reuters in a report about the issue.

Turkish Cypriot authorities opened a small area for day visits in November 2020, and said on Tuesday a part of it would be converted to civilian use with a mechanism in place for people to potentially reclaim their properties.

“A new era will begin in Maras which will benefit everyone,” said Turkish President Tayyip Erdogan, who was visiting breakaway north Cyprus on Tuesday. Maras is the Turkish name for Varosha.

Greek Cypriots fear a change to the area’s status displays a clear intent of Turkey to appropriate it. Cypriot President Nicos Anastasiades described the move as “illegal and unacceptable.”

“I want to send the strongest message to Mr Erdogan and his local proxies that the unacceptable actions and demands of Turkey will not be accepted,” Anastasiades said.

Greece’s Foreign Ministry said it condemned the move “in the strongest terms,” while the United Kingdom, a permanent member of the UN Security Council, said it would be discussing the issue as a matter of urgency with other council members, saying it was “deeply concerned.”

“The UK calls on all parties not to take any actions which undermine the Cyprus settlement process or increase tensions on the island,” a Foreign Office spokesperson said.

US Secretary of State Antony Blinken called the announcement “provocative” and “unacceptable.” He said “the United States is working with like-minded partners to refer this concerning situation to the UN Security Council and will urge a strong response.”

United Nations resolutions call for Varosha to be handed over to UN administration and to allow people to return to their homes.

Anastasiades said that if Turkey’s “real concern was returning properties to their legal owners … they should have adopted UN resolutions and hand the city over to the UN, allowing them to return in conditions of safety.”

Tuesday marked the 47th anniversary of a Turkish invasion mounted in 1974 after a Greek Cypriot coup engineered by the military then ruling Greece. Peace efforts have repeatedly floundered, and a new Turkish Cypriot leadership, backed by Turkey, says a peace accord between two sovereign states is the only viable option.

Greek Cypriots, who represent Cyprus internationally and are backed by the European Union, reject a two-state deal for the island that would accord sovereign status to the breakaway Turkish Cypriot state that only Ankara recognizes.

“A new negotiation process [to heal Cyprus’ division] can only be carried out between the two states. We are right and we will defend our right to the end,” Erdogan said in a speech in the divided Cypriot capital of Nicosia.

Varosha has always been regarded as a bargaining chip for Ankara in any future peace deal, and one of the areas widely expected to have been returned to Greek Cypriot administration under a settlement. The Turkish Cypriot move renders that assumption more uncertain, Reuters notes.