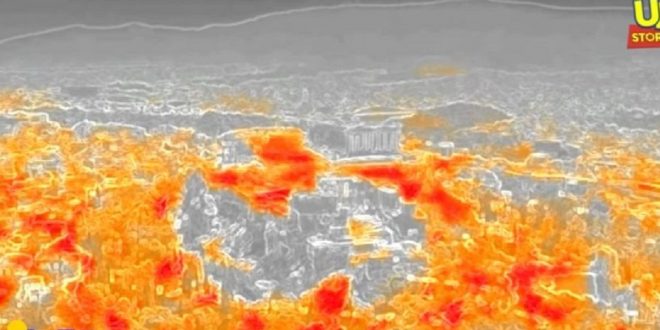 Drones with thermal cameras flew over the Acropolis and the Omonia Square on one of the hottest days in Athens and the country on Sunday, to determine that the phenomenon of the Urban Thermal Island is getting more and more intense every day, especially in the Greek capital.

The Project was materialized in cooperation between Up Stories team and the meteo of the National Observatory of Athens.

Ground temperature at the rock of the Acropolis as well as in the historic center of Athens was 55 degrees Celsius as the drone flew around. 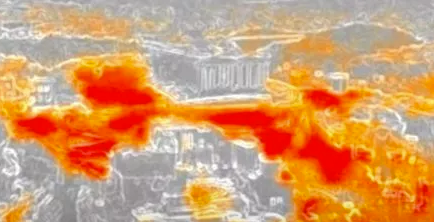 At the same time, the air temperature ranged between 36-37 ° C, according to the meteorological stations of the National Observatory of Athens.

The highest temperature values ​​were recorded on the asphalt and on the roofs of old buildings with air conditioning units (over 60 degrees Celsius), while the lowest values ​​on the facades of new buildings and the new fountain in Omonia Square (up to 35 degrees Celsius).

An Urban Thermal Island is an urban area or metropolitan area that is significantly warmer than its surrounding rural areas due to human activities. It is formed as a result of several factors: like Reduced Natural Landscapes in Urban Areas as trees, vegetation, and water bodies tend to cool the air by providing shade, transpiring water from plant leaves, and evaporating surface water, respectively. Other factors are paved and impermeable surfaces,dark surfaces and thermal masses like A/Cs.

Monday, 2. August 2021, is forecast to be the hottest day in Greece hit by a heatwave meteorologists describe as “historic.”

The heatwave started last Tuesday, July 27, and is prolonged until Friday, August 6. The 11-day-long phenomenon is one of the strongest heatwaves in the last 40 years at leas.

Temperatures are forecast to reach 44-45 degrees Celsius throughout the country and in some areas up to 47 ° C.