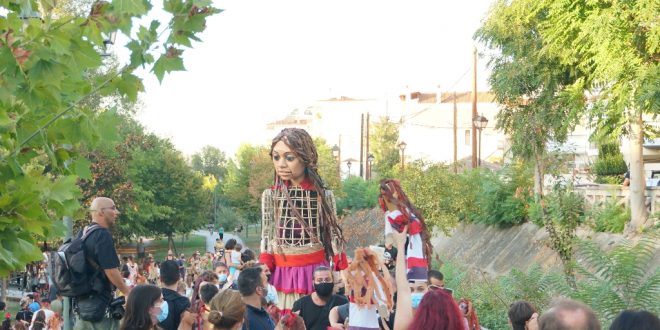 A group of people thew stones and harassed locals who went to see the arrival of the Amal refugee doll in the city of Larissa, central Greece, on Tuesday. Other protesters held icons and religious symbols to “exorcise” the big little doll symbolizing refugee children and their plight.

Protesters shouted “Shame” as the 3.5-meter-high wooden doll walked along the riverside where the event was taking place.

Children that were there with their parents to offer symbolic gifts to Amal were panicked as protesters threw items at the doll, local media larissanet reported.

Police had to intervene to restore the order and the event organized by the municipality ended earlier than scheduled.

With religious symbols against Amal that represents a 9-year-old Syrian refugee girl.

The giant puppet Little Amal, which is on a 5,000-mile journey from Turkey to Britain to highlight the plight of Syrian refugees and the stories of the millions of youngsters traveling alone.

The wooden doll artwork created by Handspring Puppet Company passes through several cities in Greece and has for the most part been warmly embraced since it arrived from Turkey last month.

Local reports referred to what they described as xenophobic responses of those opposed to the puppet passing through their city.

After Greece, Little Amal will go to Italy, France, Switzerland, Germany, Belgium and finally the UK where her journey will end in Manchester on November 3.