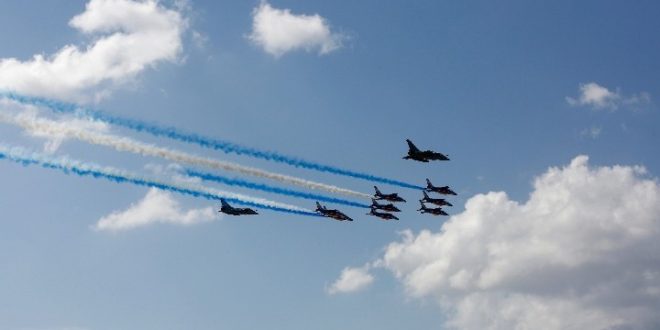 The pilots of the two French Rafale fighter aircraft and the “Patrouille de France” aerobatic display team found a special way to bid farewell to the city of Athens on Monday morning: They flew in formation above the Acropolis using the colors of the Greek flag.

The formation was accompanied by the Greek F-16 Zeus.

The French aerobatic team was in Athens to participate in the Athens Flying Week air show, held at the Tanagra air base on September 4-5.

The Athens Flying Week kicks off on Saturday at the airforce base in Tanagra. Audience was able to watch, among others, next to the French Rafale, also the original Warbird and the Greek Spitfire and also see the flying ‘dance’ of the Patrouille de France and of the Saudi Hawks, the Greek F-16 Zeus and the Danish F-16 Solo Display, the RC Kavala Acro Team and the Twilight Flying Display by Italian Luca Bertossio.

PS when the formation flew over Athens this morning, the two cats weren’t quick enough to seek the nearest couch and hide under. But they were in panic due to the horrible sound, as the jets flew quite low.