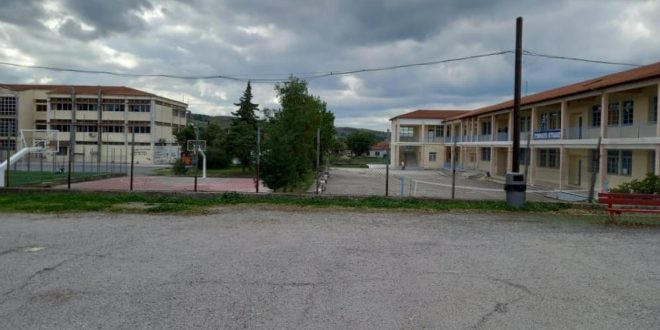 A 14-year-old student fell victim of an unprecedented and horrifying racist attack at a high school of Istiaia, in central Greece. The boy was dragged outside the classroom by a group of older students wearing hoods.

According to the mother’s complaint to newspaper avgi,, initially a group of 5-6 youngsters entered the high school premises on Tuesday morning, went directly to the class where the victim was, started knocking on the windows of the classroom and opened the door shouting racist insults.

The teacher asked them to leave, but they did not do so immediately, but provocatively stayed for a while and then left.

In the next teaching hour, however, the group came back, was enhanced by another 6-7 youngsters, probably students form the neighboring vocational EPAL school.

At the time of the attack, the teacher was absent preparing material for a project. When she saw what was going on, she run to save the child but this was impossible. she screamed for help and together with the principal they called the police that arrived just when the racists were pushing the victim outside the school.

At the hearing of the police, half of the attackers fled, while the other half kept abusing the child inside the courtyard.

Police officers took the attackers’ data but did not arrest them. On the contrary, they put the victim into the patrol car and took him to police station.

To the mother’s complaint, a teacher at the elementary school of the school complex, police responded they did it for the victim’s protection.

Following the complaints, the local Police Department ordered an investigation into racist motives of the brutal incident that brings in mind actions of the KKK.

According to newspaper avgi that published the story the victim is the child of a single-parent family with a Greek mother and a Cuban father. His mother works as a teacher in the school and the child didn’t have any problems with his classmates, his teachers or the local community.

However, two weeks ago, the 14-year-old child was targeted with vulgar racists insults and threats on social media.

Based on testimonies of other students’ and parents who were informed by their children about the online racist bulling, the online attackers, students of EPAL, threatened to physical and sexually abuse the child.

Worth noting that far-right groups have tried to win the support of youth in recent weeks and infiltrated vocational schools in northern Greece, where they initiated violent incidents against youth leftists.