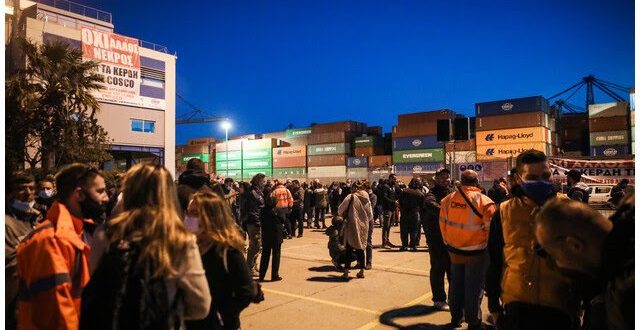 COSCO Workers at Piers II and III in Piraeus port launched one more 48-hour strike on Friday to demand up-to-date safety conditions at work and an investigation into a fatal accident at the Piraeus Container Terminal, in which a worker was killed.

ENEDEP, a union representing workers handling containers at Piraeus port, stressed in an announcement that it will fight a hard battle to prevent more deaths and injuries and that it will not back down until the workers’ demands are met. It also called workers to the port at 13:30 on Friday to guard the strike.

Apart from an investigation into the causes of the accident that killed one of the union’s members, it is also demanding the creation of a health and safety committee, an end to back-to-back shifts (two full shifts with just eight hours rest in between), as well as of 12-hour shifts and the signing of a collective labour agreement, among others.

The Union of Piraeus Port Dock Workers will also participate in the rally, with the union noting that the recent accident “has highlighted in the most tragic way the shortcomings in health and safety issues.”