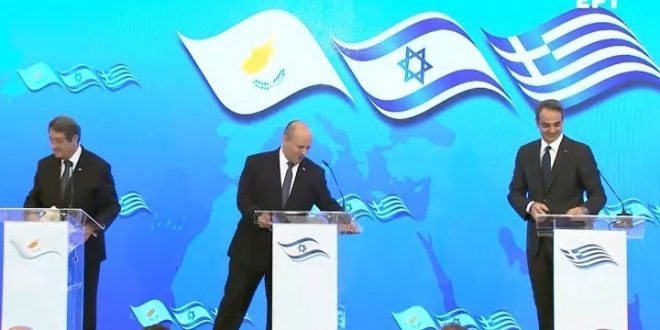 “Our relations with Israel have never been better,” says Greek PM

December 7, 2021 Greece, Politics Comments Off on “Our relations with Israel have never been better,” says Greek PM 262 Views

“Our relations with Israel have never been better,” Prime Minister Kyriakos Mitsotakis said in joint statements with Cyprus President Nicos Anastasiades and Israel Prime Minister Naftali Bennett in Jerusalem on Tuesday. The prime minister referred to the strategic alliance between the three countries.

Speaking about the pandemic, he stressed the need to continue the effort to increase vaccinations and give booster shots to as many people as possible.

Mitsotakis said that they will have the opportunity to discuss the issue of climate change, adding that environmental protection is a very important issue for Greece. In this regard, he thanked the leaders of Israel and Cyprus for the assistance they provided in extinguishing the mega-fires that blazed in Greece during the summer.
He also said that they will discuss energy issues and referred to the importance of EastMed gas forum as a mechanism of cooperation.

Regarding Turkey’s stance, he said that it unfortunately demonstrated “continued intransigence and unacceptable behaviour, both on land and in the maritime zones of Cyprus” and stressed that any settlement in the fenced-off city of Varosha will “condemn any attempt for a mutually acceptable solution” of the Cyprus issue.

He also reiterated that the only viable solution to the Cyprus problem is one that fully respects all decisions taken by the UN Security Council and stressed that there can be no solution without an abolition of the anachronistic system of guarantees and rights of third parties to intervene in Cypriot affairs and the complete withdrawal of Turkish occupation troops from the island.