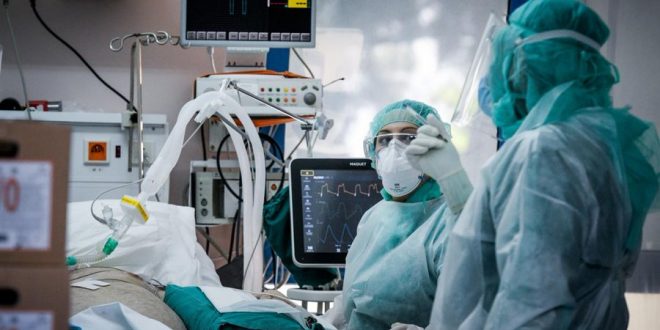 Tsiodras/Lytras study on intubated Covid-patients: Mortality at 87% if outside ICU, discrepancies in hospital regions, limits of health system

December 15, 2021 CORONAVIRUS, FEATURED Comments Off on Tsiodras/Lytras study on intubated Covid-patients: Mortality at 87% if outside ICU, discrepancies in hospital regions, limits of health system 1,103 Views

A study conducted by the members of the Epidemiologists Committee Sotiris Tsiodras and  Theodoros Lytras examined in-hospital mortality of intubated COVID-19 patients in Greece, in relation to total intubated patient load, intensive care unit (ICU) availability and hospital region. Apart from the medical aspect, the study has also political one as it reveals that the Greek public health care system (NSS) is unable to respond to the burden with >400 intubated patients. It also exposes the Prime Minister who said beginning of December that it makes no difference for intubated patients if they are in or outside the ICU. 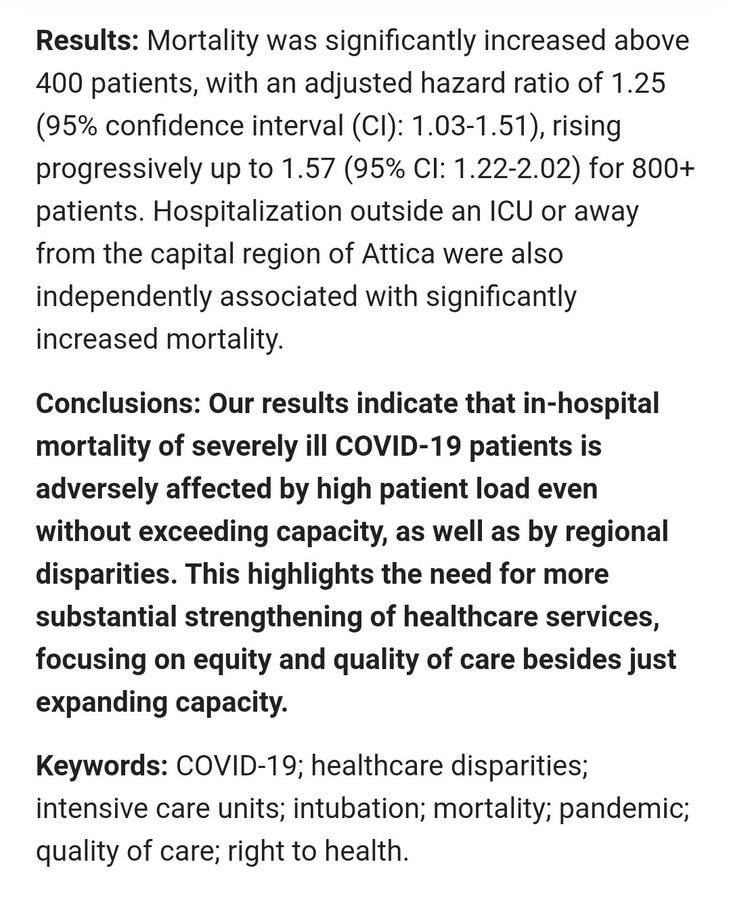 “Mortality is 87% for intubated patients outside ICU.”

*Hospitalization outside an ICU or away from the capital region of Attica were also independently associated with significantly increased mortality.”

Highlights of the study were posted late on Monday by Theodore Lytras on Twitter.

“Findings are summarized on this chart. The more intubated patients in the NSS, the higher possibility of death per day of hospitalization gradually: + 25% for >400, up to + 57% for> 800 patients. Death rate at a hospital outside Attica is +35-40%.”

*”Data show that the NSS is unable to respond to the burden: with>400 intubated patients, we are losing patients who are expected to live if they were treated in other conditions. In addition, we have glaring and unacceptable health inequality between Attica and the rest of Greece.”

One has also to understand that in October 2021 there were 350 intubated Covid-patients in hospitals, while on December 14 there are 700. Whether 350 or 700 these patients are being treated with the exact same staff and equipment.

Beginning of December Prime Minister Kyriakos Mitsotakis spoke to the Parliament of the quality of treatment of intubated patients outside the ICU arguing that there was no evidence of higher mortality than among those inside. He claimed further that there was no study proving otherwise. “Is there any study on this? I wouldn’t know… or you bring me one,” The PM said.

And here comes Lytras who clarified on Twitter that the study results were “immediately and repeatedly communicated to all those who take decisions at the highest level.”

So far, there has been no reaction by the PM’s office or the government spokesman or any talkative minister on the data of the study that was “an idea of Sotiris Tsiodras” as Lytras noted.

No mainstream media has made a furor on the “government responsibilities” on the number of Covid-deaths: 19,475 in total since the stat of the pandemic, 1,318 since the start of December, 130 alone on Tuesday.

Only opposition parties reacted, so far.

The general secretary of the Federation of Hospital Doctors Associations of Greece (OENGE), commented on the Tsiodras/:Lytras study emphasizing that “out of 3988 deaths of intubated Covid-patients, “1535 (38.5%) were potentially avoidable in Greece based on the data 1/9/20 – 6/5/21.”

Meanwhile, the president of Hospital Workers Union POEDIN Mihchalis Giannakos filed s lawsuit at the prosecutor’s office of the Supreme Court on Tuesday morning calling for the investigation of VIP ICUs. “There 40-50 ICU beds are reserved for VIP Covid-patients” Giannakos characteristically told media.