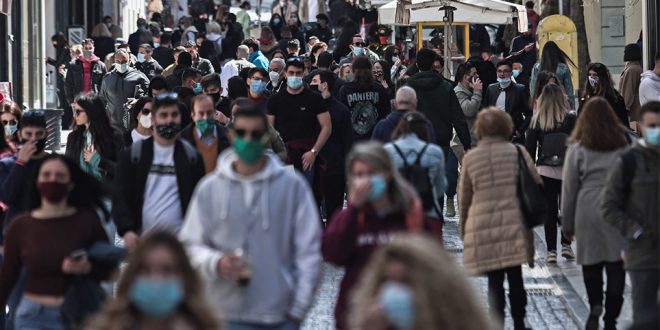 Greece’s Health Minister Thanos Plevris warned on Tuesday morning that the number of new coronavirus infections will be “over 15,000 today,” a day after infections broke an all times record with 9.284 cases on Monday. The minister revealed that the epidemiologists’ committee will meet tomorrow Wednesday to decided whether the new measures against Covid-19 may be implemented before the New Year’s Eve.

Speaking to state broadcaster ERT, Plevris said that based on the data on Tuesday morning, health authorities are bracing for more than 15,000 cases being reported for the 24-hour period until 3 p.m.

He added that the new restrictions that are scheduled to go into force from January 3, may be implemented earlier.

The epidemiologists’ committee will meet again tomorrow to evaluate the pandemic situation taking into consideration “the infections numbers today and tomorrow,” he said.

“Everything is open,” Plevris said adding that “there might be additional measures even much earlier.”

Plevris said that the National Health System is not currently under pressure due to the low morbidity of the Omicron variant in Greece. However, he warned of the quick Omicron spreading and said that the overwhelming majority of new infections are people aged 18-39.

Earlier on Tuesday, Pulmonology professor and vice president of the Greek Pulmonology Society, Nikos Tzanakis said that the number of active cases right now is estimated at more than 100,000.

He stressed that the situation in Greek capital (Athens & Attica) is particularly worrying and emphasized that “there has been a four-fold increase in new infections since December 7 in parts of Attica.”

Tzanakis added that 50%-60% of the infections are of the Omicron variant and said that the measures should be best “implemented as of tonight.”

He predicted that the peak of infections is expected January 15-20.

Note that the Committee makes recommendations to the government that on its part takes the final decision. It seemed that the Committee had advised the government on Monday to implement the measures before the New Year. For one more time, the Greek government set its priority on the “political cost” and now has to run behind the developments. Some health experts had already calculated that daily infections would be over 10,000 after Christmas.