Breaking News
Home / Opinion / Blog / The Pandemic as a Chance: “We have deaths, Yes, but we saved tourism,” says Greek PM Mitsotakis 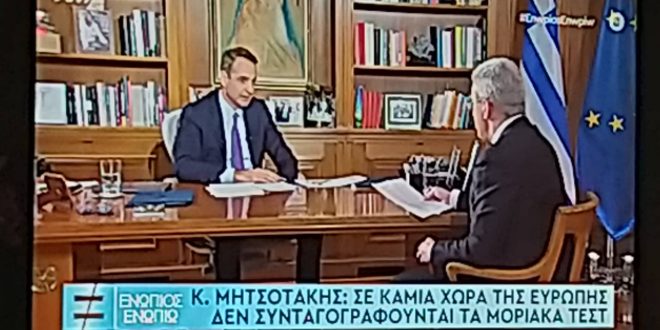 The Pandemic as a Chance: “We have deaths, Yes, but we saved tourism,” says Greek PM Mitsotakis

The pandemic as a chance. Greek Prime Minister Kyriakos Mitsotakis is an optimist person who always sees the bright side of life against all odds including some thousands of deaths. For example, late on Thursday and in an interview with ANT1 TV, the 53-year-old leader responded to the question “-We didn’t do well in 2021 having 16,000 deads”:

“Yes, we had deaths but we kept the economy open, we avoided the lockdown. We have saved tourism. And the economy has recorded extremely high growth rates, which will definitely exceed 7 percent.”

He is also optimist about the course of the Omicron variant even though also a bit cautious.

“We saw a sharp increase in cases in Greece at the end of last month. We are already seeing a de-escalation and all the data from other countries show that it is more or less like a summer storm: high intensity, it rises quickly, but it also leaves quickly,” Mitsotakis said.

As for the economy, he said that high growth rates were recorded in 2021. “Disposable income has improved for all citizens, taxes have been reduced, tourism has well performed, unemployment rate has dropped, new jobs have been created.”

Asked on unemployment rates and the recent EU data that show Greece to be a champion in youth unemployment, Mitsotakis replied:

“Unemployment fell from around 17% to around 13%. And this happened in the midst of a pandemic. We are not going to say that we are satisfied with our performance in the labour market except when unemployment falls to single-digit numbers. This is the goal we have set.”

Ιt’s not the first and not the last time the ambitious Greek PM sees the pandemic as a chance. Right from the beginning, in February 2020, when the coronavirus was hitting Italy, the government was seeing a chance for Greece expecting increase on tourism arrivals. the dream was soon over…

Also on Wednesday, the Prime Minister reiterated his optimism that the pandemic is a chance for the country.

Speaking at the Greek Tourism 2030 – National Action Plan presentation, the PM reiterated The Greece will come out of the pandemic crisis as a winner.”

“I believe that Greece will benefit from the crisis of the pandemic in the tourism sector. The country is currently in very good shape in terms of its international image. All MEGAtrends, especially the shift to wellness, experience, people, coexistence with the natural and cultural environment, I believe highlight the important comparative advantages of the country,” he stressed.

So why are Greeks whining? Due to the price hikes, maybe or the insecurity due to pandemic?

The PM has solutions and logical explanations. The price hikes are imported and not made in Greece.

In his interview with ANT1, he was proud to announce the hikes are “an imported phenomenon as a result of higher natural gas prices which have also affected electricity prices.”

“From the very first moment we said that we will support households, and now businesses, subsidizing part of the increase. Can we fully cover the increase? No, we can not cover the full increase. But we can cover an important part. We did it for households in the last months of ’21, we will do it for as long as this great turmoil in the energy market lasts,” he stressed.

PM Mitsotakis also announced a second increase in the minimum wage to be implemented as of May 1, 2022.

Electricity aid would be 40 euros and 42 for natural gas per household, when real life bills are 3 or 4 times higher… Greeks told media on Friday that 2-month power bills went up from 120 euro to 240 euro, and natural gas for heating rose from 150 last year to 400 euro. Still whining? Still not sharing the PM’s optimism? This mean you have no idea about branding and selling a product in terms of modern politics and PR.

BTW the lock down last year, lasted some 6 months…