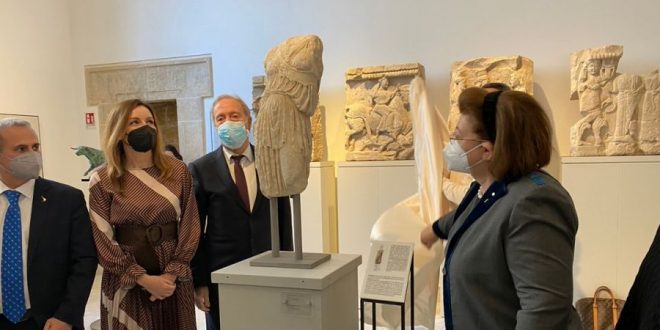 February 9, 2022 Archeology, Culture, FEATURED Comments Off on Statue of Athena handed out to Palermo Museum in exchange of Fagan fragment 482 Views

A statue of goddess Athena from the Acropolis Museum was handed out to the Antonino Salinas Regional Archaeological Museum in Palermo, Sicily, Greece’s Culture Ministry announced on Wednesday. Athena will be exhibited in Palermo in exchange of the so-called Fagan fragment from the Parthenon frieze that was borrowed to the Acropolis Museum beginning of January 2022.

The statue of Athena dates between 420-400 B.C. and shows the goddess leaning on her spear that has gone lost during the times. After four years, the statue will be replaced by a geometric pottery vase.

The statue will remain on display in Sicily for four years, in return for the generous gesture and and Sicily’s political will in returning the Fagan fragment from the Parthenon frieze to the Acropolis Museum for eight years and to ask the Italian government for its permanent return, the Ministry said in a statement.

Addressing the ceremony, Culture Minister Lina Mendoni did not miss the opportunity to speak about the return of the Parthenon Marbles to Greece. The loan of two significant ancient artifacts from the Acropolis Museum collection to Palermo indicated the path that London can follow in this regard.

“The return and reunification of the Parthenon Sculptures in Athens is a moral obligation for all of Europe, in the context of protecting our common cultural heritage. And the greatest strength for their reunification is the faith of the European themselves, as that of British citizens, in the importance of the Parthenon, this supreme monument for European culture,” the minister noted, stressing that Greece views the architectural Parthenon sculptures at the British Museum as the proceeds of theft.

“Greece does not recognise any right of ownership, possession and exploitation of these. On the contrary, it is constitutionally obliged and morally justified in demanding and striving for their final, permanent and irrevocable return by any legal and available means, in order to restore justice and the moral order and chiefly to restore the integrity of the monument,” she added.

The Culture Minister said also that Greece is open to further cooperation with Sicily and is willing to entrust it with certain artifacts relating to the myth and form of Ulysses to be included in an exhibition dedicated to the mythic hero.