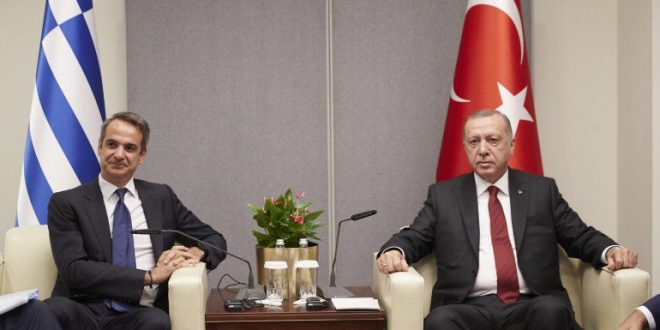 Greek Prime Minister Kyriakos Mitsotakis and meet with Turkish President Recep Tayyip Erdogan will meet in Istanbul on upcoming Sunday, March 13, and will have lunch at the presidential residence, government spokesman confirmed on Tuesday. The meeting follows an invitation by the Turkish president.

Mitsotakis will be visiting the Ecumenical Patriarchate on the occasion of the Feast of Orthodoxy.

Right after the meeting was leaked to Turkish press, Erdogan’s close aidee and spokesman of Justice and Development Party (AKP), Omer Celik said that all issues between the two countries will be on the agenda of the two leaders.

“There are many issues that we cannot agree on with Greece. Lately we have seen Greece turning problems that can be solved between ourselves into issues between Turkey and the European Union,” Celic.

Turkish Defense Minister Hulusi Akar said that “despite our peaceful approach, our invitations and our calls for dialogue, some Greek politicians continue their provocative actions.”

Athens seems to remain cool reiterating that the Prime Minister has stated that he is always open to a meeting with the Turkish President, especially under the new conditions created by the Russian invasion of Ukraine that have created new challenges for the two neighboring countries.

“The Russian invasion of Ukraine has dramatically changed the security situation in Europe, but at the same time has shaken the international community’s unequivocal condemnation of all forms of expansionism and revisionism. The Prime Minister in the meeting with the Turkish President in a positive mood focusing on the substance and not on the rhetoric,” Oikonomou said

“Without illusions and, of course, without differentiation from the fixed and formulated positions of Greece that are based on international law,” he stressed.

Regarding the agenda as “set” by Celic, the Greek government spokesman said that Ankara has said these things a thousand times and they have been always answered by Greece accordingly.

“They can obviously not be a basis and agenda for discussion,” Oikonomou underlined.

Greece’s view on the differences with Turkey is well known and concerns the delimitation of maritime zones.

Turkey has been vehemently insisting of demilitarization of Greek islands threatening even to challenge their sovereignty.