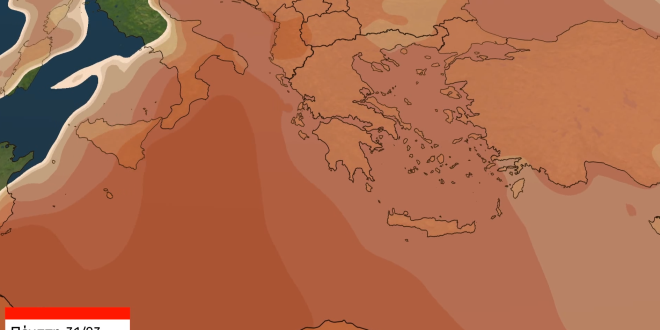 A new massive Sahara dust cloud is forecast to be transferred to Greece from North Africa between Tuesday and Saturday, March 29 and April 2, 2022. Quantities of Sahara dust have been transferred to the country since last Sunday, March 27, but the new cloud will be significantly stronger.

According to the meteo service of the National Observatory of Athens, the prevalence of southern winds from Tuesday to Saturday will bring clouds of Sahara dust to Greece for an unusually extended period of time.

While the phenomenon is not unprecedented for the season, it remains unusual, as the dust transfer does not normally last more than two to three days.

Among the most important repercussions will be:
– to contain the rise in temperatures expected in the next few days
– locally restricted visibility
– muddy rain from Thursday, March 31, mostly in western and northern parts of the country.

Greece is not the only country in Europe to be affected by the billions of annoying particles.

According to Severe Weather EU, the massive cloud is forecast to spread also into central Europe this week.