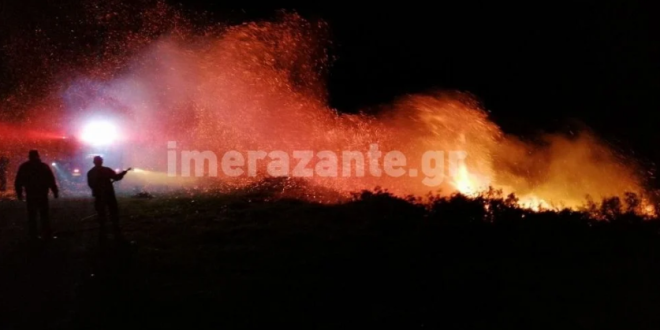 Two forest fires broke out in the mountains of Zakynthos on Thursday night with stormy winds blowing with intensity of over 9 Beaufort. One the fire is in the area between Kambi and Exo Chora and the other in the area of ​​Spiliotissa in Orthonies.

The immediate intervention of the fire brigades and local residents, as well as the assistance of the Civil Protection  have so far avoided the worst.

According to local media imerazante, the fire between Exo Chora and Kambi is already controlled by the fire brigades.

The fire in Orthonies started from a power poll that fell to the ground due to the stormy winds.

While the fire also in Spiliotissa in Orthonies is on a good way to gt under control, local authorities have requested the bus administration to have drivers on standby in case they need to pick up some residents and evacuate them.

Late in the evening, the winds intensified and small fire-revived.

Firefighters operating on the fire areas are stepping up to ensure the blaze gets under control, notes imerazante.gr

It should be recalled that sea traffic was halted to and from the Ionian islands, including Zakynthos-Kyllini, on  Thursday due to the stormy winds reportedly reaching up to 10 Beaufort.