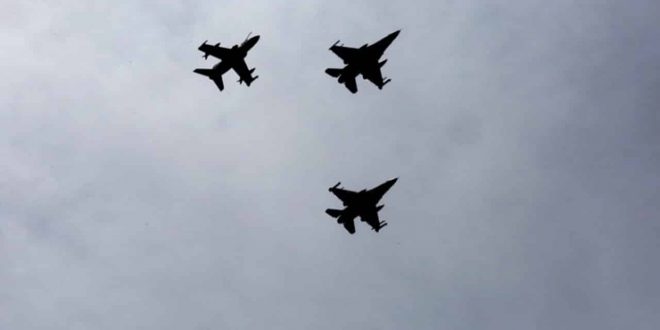 Turkish fighter jets not only violated Greek air space for one more time but they also interrupted the multinational military NATO exercise INIOHOS in the south Aegean Sea.

During the planned exercise part where Air Force and the NATO SNMG2 Permanent Allied Naval Force would cooperate and while an air defense exercise was in progress, two Turkish F-16s entered the area.

The Turkish fighters entered the national airspace illegally and more specifically in an area that had been blocked with air and naval directives, a NOTAM and a NAVTEX for the NATO exercise.

As a result of the Turkish provocation, the Spanish NATO commander was forced to suspend interrupt the exercise.

Clearly irritated by Ankara’s unheard-of-NATO behavior, an internal investigation within the Alliance was ordered, media report.

According to an exclusive report by news website enikos.gr, all NATO ranks in Brussels were informed about the unacceptable behavior of the NATO member Turkey.

This is the second time that Turkish fighter jets intervene into a NATO-led exercise SNMG2 that was again interrupted on March 23 off the coast of Karpathos island, thus endangering the safety of NATO ships and fighter jets taking part.

The drill that takes place annually among the NATO allies includes practicing scenarios of airforces as well as in cooperation with naval forces.

For the first time, the exercise involves two aircraft carriers in the Aegean Sea, the American “Harry S. Truman” and the French “Charles De Gaulle”.