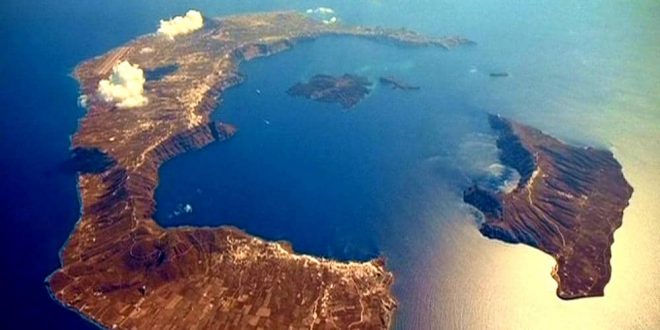 Traces of the largest known volcanic landslide in the entire Mediterranean, with a volume of up to 125 cubic kilometers, have been discovered in the sea around the island of Santorini by Greek and foreign scientists. They estimate that the landslide occurred some 700,000 years ago, that is at the early evolution of the island in the Aegean Sea.

The researchers’ new study, which was published in the international geosciences Basin Research journal, says that based on the abundant evidence left behind, experts can estimate that the landslide occurred some 700,000 years ago.

Santorini is where one of the world’s largest known eruptions of the last 12,000 years took place; it was during the Minoan era about 3,600 years ago.

Throughout its history, the island has experienced large explosions, caldera collapses and extensive lava formations.

However, significant landslides, in which large amounts of sediment and rocks slide into the sea and can cause tsunamis, had been almost unknown – until now.

Volcanic island sector collapses have the potential to trigger devastating tsunamis and volcanic eruptions that threaten coastal communities and infrastructure. Considered one of the most hazardous volcano-tectonic regions in the world, the Christiana-Santorini-Kolumbo Volcanic Field (CSKVF) lies in the South Aegean Sea in an active rift zone.

Previous studies identified an enigmatic voluminous mass-transport deposit west and east of Santorini emplaced during the early evolution of the edifice. However, the distribution and volume as well as the nature and emplacement dynamics of this deposit remained unknown up to now.

In this study, we use an extensive dataset of high-resolution seismic profiles to unravel the distribution and internal architecture of this deposit.

We show that it is located in all basins surrounding Santorini and has a bulk volume of up to 125 km3, thus representing the largest known volcanic island mass-transport deposit in the entire Mediterranean Sea.

We propose that the deposit is the result of a complex geohazard cascade that was initiated by an intensive rift pulse. This rifting event triggered a series of smaller precursory mass-transport events before large-scale sector collapses occurred on the northeastern flank of the extinct Christiana Volcano and on the southeastern flank of the nascent Santorini. This was followed by the emplacement of large-scale secondary sediment failures on the slopes of Santorini, which transitioned into debris and turbidity flows that traveled far into the neighboring rift basins. Following this cascade, a distinct change in the volcanic behavior of the CSKVF occurred, suggesting a close relationship between crustal extension, mass transport, and volcanism.

Cascading geohazards seem to be more common in the evolution of marine volcanic systems than previously appreciated. Wider awareness and a better understanding of cascading effects are crucial for more holistic hazard assessments.

More on the PFD on Basin Research