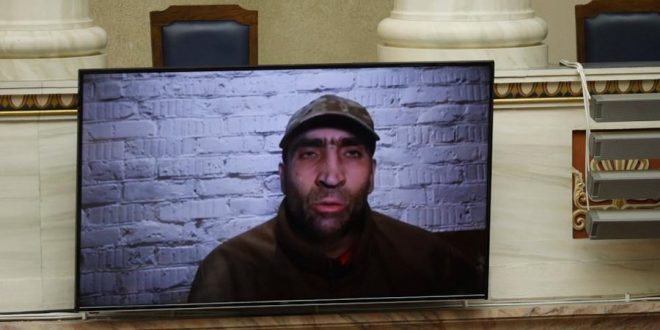 The Azov “is part of the Ukrainian army. The Nazis are the Russians.” With a month delay Ukrainian president
Volodymyr Zelensky said about the video presence of two fighters of the controversial neo-Nazi brigade in the Greek parliament beginning of April, an act that had provoked a storm of reactions. Meanwhile, it seems that one of the fighters, an ethnic Greek, is dead.

In an interview with state broadcaster ERT on Sunday, Zelensky defended the recorded message of ethnic Greek Azov fighter, known with his first name Mihail, to the Greek Parliament but also the controversial neo-nazi Azov Brigade.

Zelensky said that diplomatically, but also clearly at the start of the war in East Ukraine, in 2014, when the country did not have enough battle-ready troops, many voluntary groups were created to fight the Russian invasion, including the Azov Brigade.

“I would like to note, however, that today the Azov Brigade is part of the National Guard, of Ukraine’s Armed Forces, that is, they are professional soldiers who are defending Mariupol. On the contrary, it is the Russians who are behaving like Nazis.”

It is recalled that Volodymyr Zelensky’s speech in Greek Parliament on April 7 was overshadowed by the appearance of  two fighters of the  Azov Brigade, triggering a political and social outrage.

Zelenky’s defense of the Brigade on Sunday was not welcomed either.

On Tuesday, the Ukrainian ambassador to Greece claimed in an interview with ERT that Azov fighter Mihail had died. There were reportedly rumors over the weekend that he was dead, however, his death circumstances are unclear.