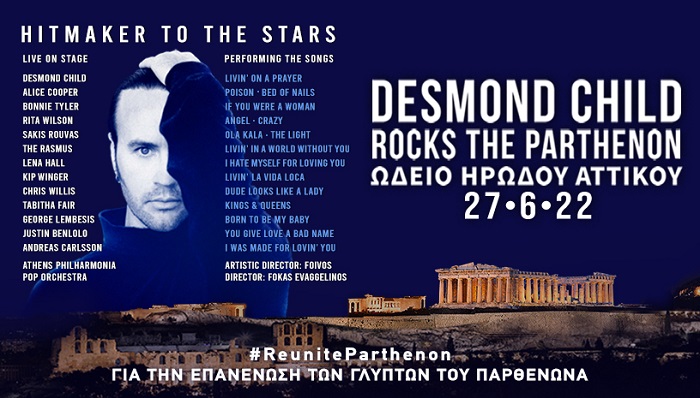 Grammy Award-winning American composer and producer  Desmond Child, Alice Cooper, Bonny Tyler , Sakis Rouvas and other musicians join forces in a concert with the aim of reunite the Parthenon Marbles.

The concert with the title “Desmond Child Rocks the Parthenon” is scheduled to take place at the Odeon of Herodes Atticus on June 27, 2022.

According to organizers, “this unique, unrepeatable concert will not only draw the attention of the international community to Greece, its people and Greek culture, but, most importantly, will pay tribute and declare its support for the ongoing global campaign for the reunification of the Parthenon Marbles.”

Next to Desmond Child on stage will be:

The musicians will be accompanied by a classical string orchestra, by members of the Athens Philharmonia Pop Orchestra, and the children’s choir of Spyros Lambros.

In a message Desmond Child wrote:

“This special concert is held in support of the reunification of the Parthenon sculptures in Greece, to raise awareness of the world public and to raise funds for the return of the Parthenon sculptures to their homes. I have been coming to Greece with my family for decades and I love this country with all my heart! I really feel like my second home.”

Part of the concert revenues will be donated to the Acropolis Museum, notes skai.gr.

The concert runs under the auspices of the Greek Culture Ministry.

Latest developments on Return of the Parthenon Marbles