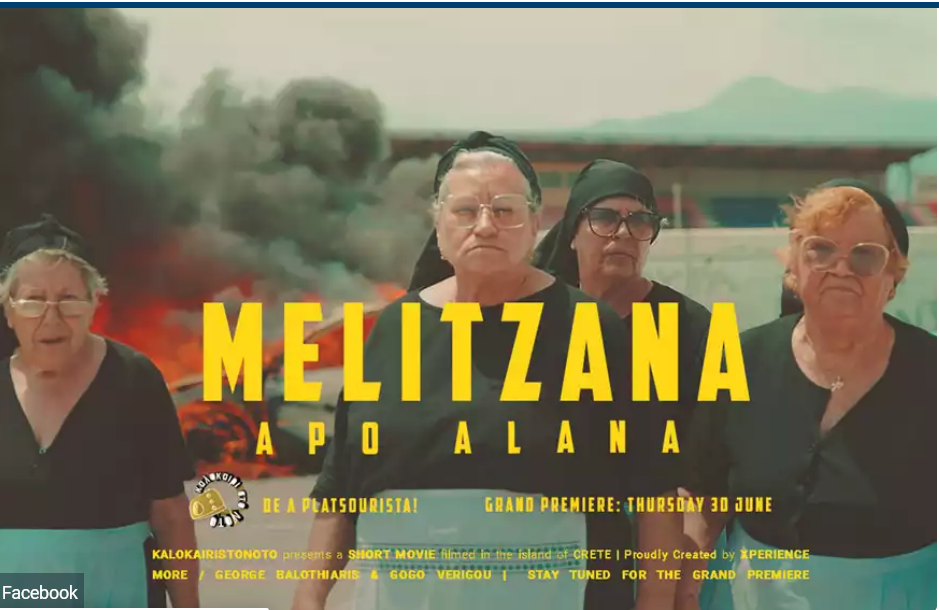 Grannies from Crete challenge trappers, sing and dance Μελιτζάνα απο Αλάνα “Eggplant from the Field”, or The Eggplant Rap and go viral.

The grannies from Crete joined forces again and created a delightful video following the recent MAD Music Awards where two trappers known as Snik and Light beat each other.

The clip producers promote it as a Blood Feud (Vendetta) between Grannies and gangstas.

“The ultimate GREEK #BEEF 🔥🔥 is here and a VENTETA (a.k.a Cretan Fight) starts in CRETE! Granny Giannoula and Granny Rodanthi bring the GANGSTA atmosphere to the picturesque alleys of Crete!”

The video clip is an ode to traditional spoon sweet in syrup made of eggplant, therefore also The Eggplant Rap.

The video is a promotion for the show “Summer in the South” which is broadcast every summer by the local radio stations Madness 95 (Lasithi), UP 92.9 (Heraklion), Hxos 94.2 (Rethimno) & Fresh Radio 105 (Chania).

The pan-Cretan radio show this year marks 19 years of presence and producers Giorgos Balothiaris and Gogo Verigou wanted to prepare an impressive video for the premiere on June 30.

*Trap is a subgenre of hip hop music that originated in the Southern United States during the early 2000s. The genre gets its name from the Atlanta slang word “trap”, a house used exclusively to sell drugs.

In trap music, lyrical themes must revolve around the general life and culture in the “trap” or in the actual southern “trap house” where narcotics are being sold. Other topics also include street life, acquiring wealth, violence, American vehicles, and life experiences.

No idea how it is in the USA, but in Greece trap lyrics also include promote degradation and abuse of women.