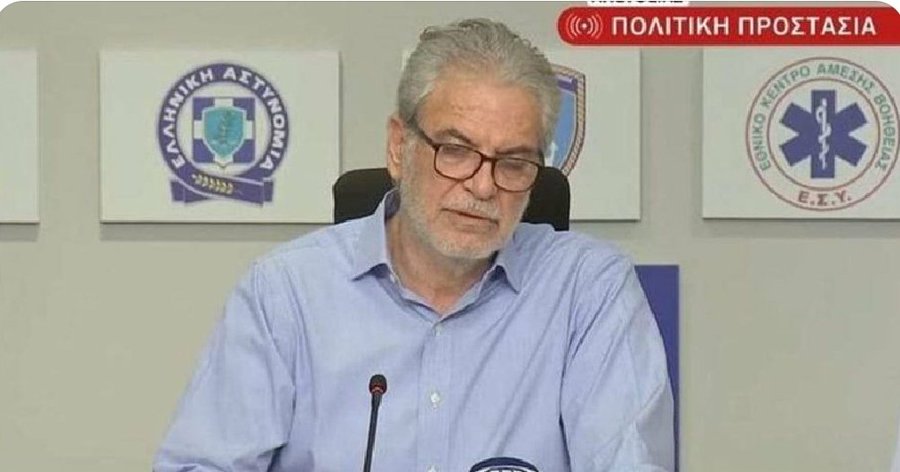 “Investigations have ruled out lightning or a short circuit as the causes of Tuesday’s Penteli fire in North-East Athens,” Civil Protection Minister Christos Stylianides said at an extraordinary life briefing on Wednesday afternoon.

It was certainly a surprise for the former EU Commissioner to have to rule out “lightning” on day with an absolutely pretty fair weather in Attica and the only clouds on the horizon being the thick smoke from the Penteli fire.

Speaking about the causes of fire, like a modern Asterix-Magician Stylianides stressed “therefore all other possibilities are open.”

Bombarding the public with unnecessary platitudes, Stylianides explained  the effect of the fires to the environment and to properties – quote: “bad effect!” – , the function of emergency line <112> -quote: “we use 112 for evacuations!” – and the ambulance service EKAV – quote: “EKAV is standby to transport people in need of help!”

He then proceeded to the summer version of the winter narrative  -when Athens was paralyzed and he claimed “snow does not fall at noon, we were caught by surprise”  – saying “it was odd that the fire strengthened at night.” Note that all thought Tuesday day and night until Wednesday noon, winds were blowing with intensity 6 to 7 Beaufort and gusts were above 8 B.

He spoke of the “particular geological morphology of the Penteli mountain,” as he did about the Hymettus Mt fire in June 2022 – obviously believing that mountains are made of flat paper sheets.sides.

And then came the Best of Stylianides: He congratulated himself for the effective coordination of the fire-fighting mechanism.

In an exemplary display of lack of empathy, he did not spare a word on the horrible impact of the Athens/Penteli fire: 46 people in hospitals with respiratory problems and light injuries, one man struggling for his life with serious burn injuries, an elderly who took his life when he saw his house on fire, evacuations in the middle of the night, dozens of burned down or damaged houses, dead animals and wildlife and a major environmental disaster of over 20,350 acres of burned forest in one of the few left “lungs” of the Greek capital.

He underlined that the efficient coordination of all firefighting forces was not accidental this year – because he was in charge. “We did it!” he cheered.

“Coordination, cooperation and timely intervention were, from the first moment, at the heart of both the ministry’s and the government’s new strategy in the management of natural disasters,” he boldly dared pointing out. Note that during his briefing, two new fires had broken out in Megara and Salamina, in West Attica and God knows where else in the country.

Like an Oscar-winner, Stylianides took time to “thank” everyone by force-name who fought against the fire in Penteli, as if the fires are over.

The newcomer in Greece, directly from Brussels and Cyprus, also mentioned something Greeks have been knowing for years: “We are at the peak of the fire season.”

His briefing was still ongoing, when the hell broke out on social media #Στυλιανιδης

The rest is history? No. He is still in his position, like everybody else. Of course, he is. About an hour later the PM also praised the super coordination that was better than the previous years.

PS I have no idea if and how he was successful as EU Commissioner coordinating whatever from his desk,  but I offer 100 euros + transport cost to any Cypriot who will take his guy back.