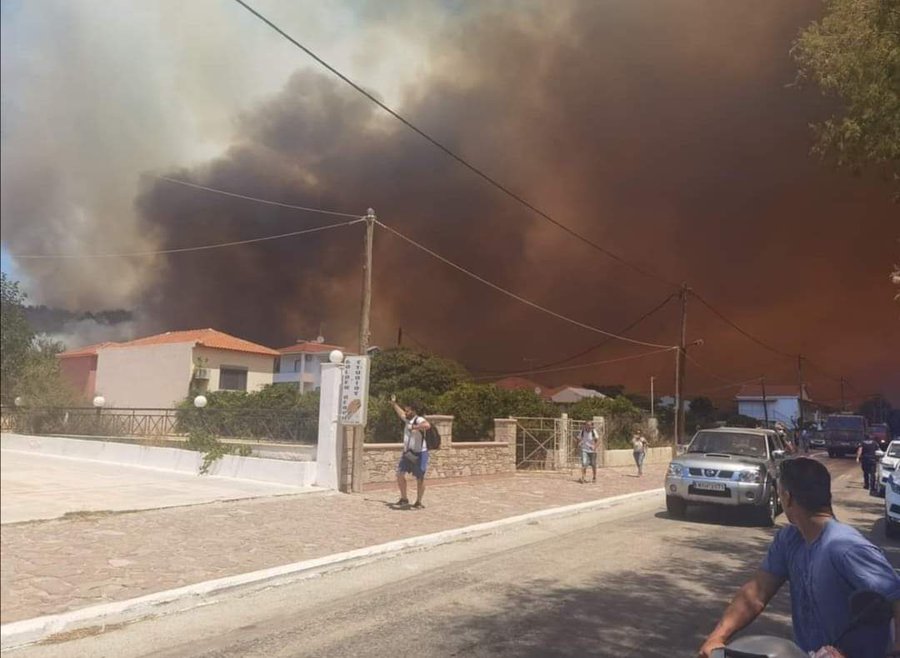 Fires are raging in Vatera, Lesvos, and Dadia Natural Forest in NE Greece

July 24, 2022 environment Comments Off on Fires are raging in Vatera, Lesvos, and Dadia Natural Forest in NE Greece 950 Views

Several major fires are burning across Greece on Sunday burning down thousands of acres of forest and low vegetation land, forcing residents and tourists to evacuations.

Some of the 53 wildfires that started on Friday and Saturday still raging at Sunday noon.

The most extensive, and dangerous, fire is the one burning down the national park and the virgin forest in Dandia, Evros, North-East Greece. 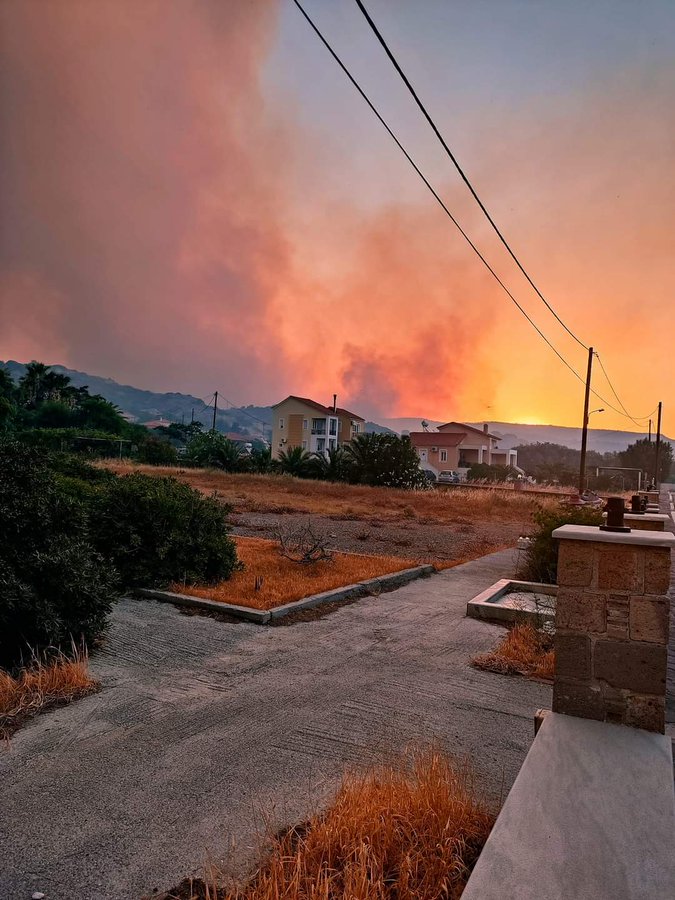 Also out of control is the fire at the seaside resort of Vatera, in South-West Lesvos that forced to evacuation also the residents of Vrisa At noon on Sunday. 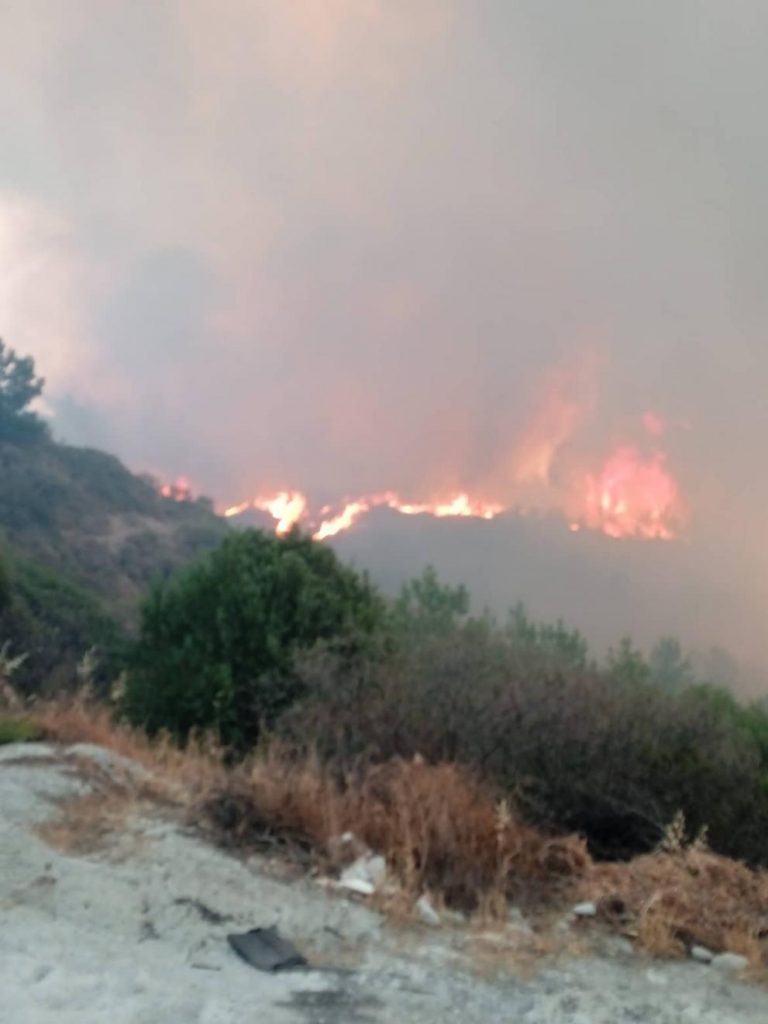 The fire reached the beach of Vatera and a second front is moving toward the village of Vrissa and Stavros, authorities said on Sunday. The fire started at 10 o’clock on Saturday and led to evacuation of locals and tourists visiting the popular seaside resort. 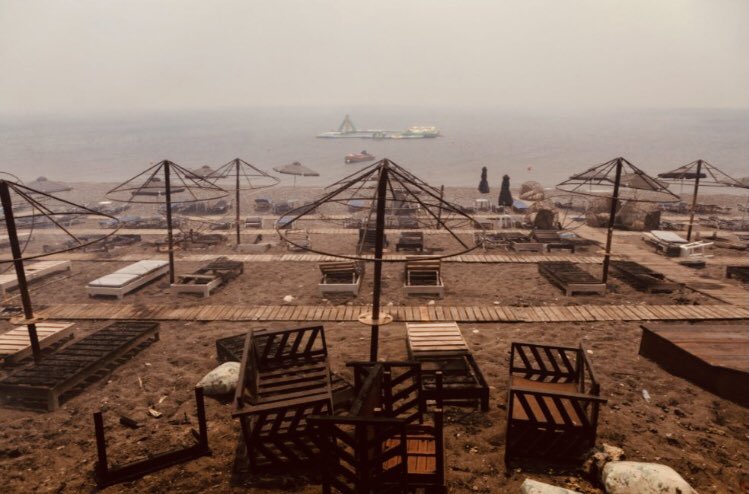 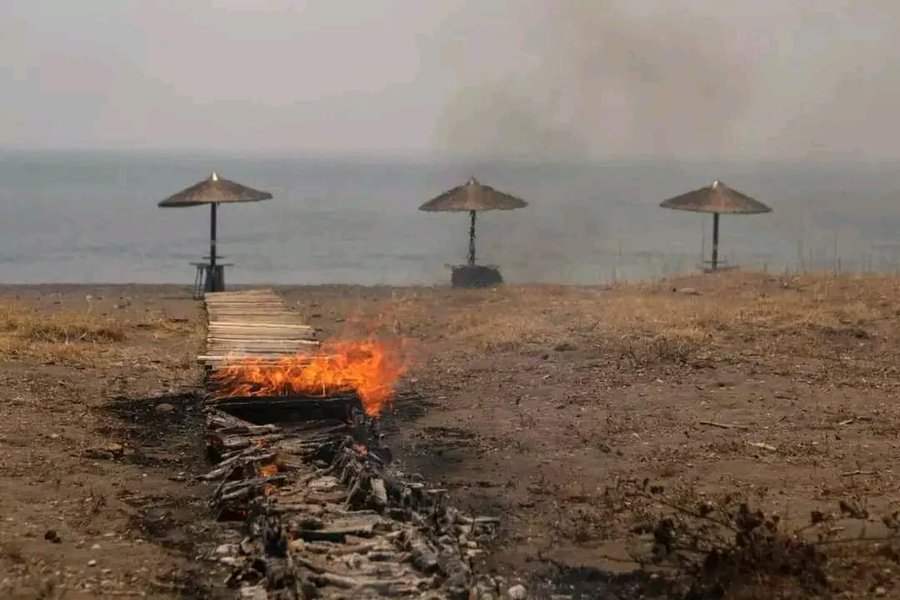 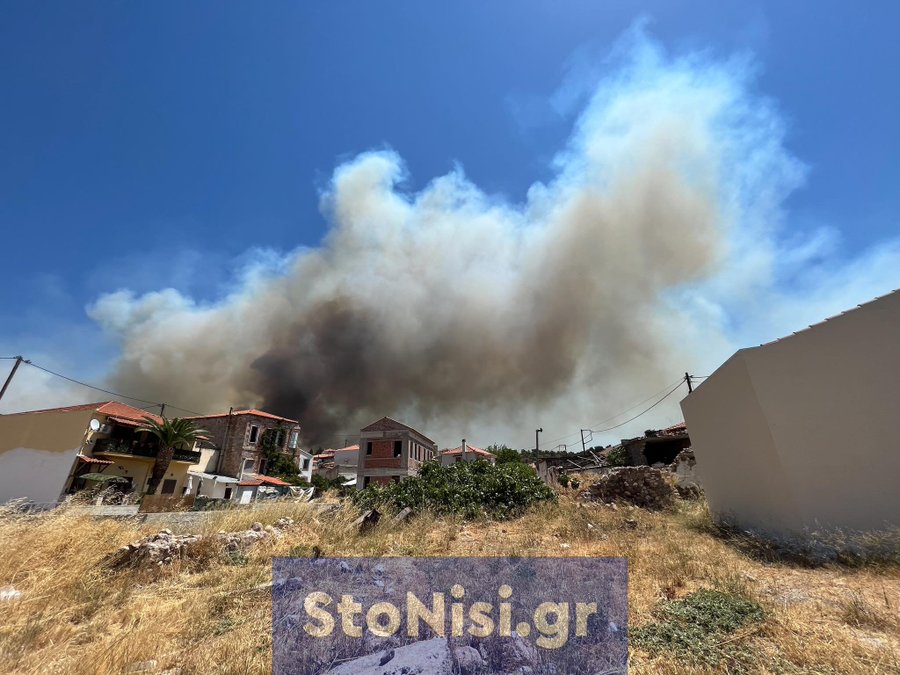 The Fire Service reported that several houses and businesses have caught fire. Officially unconfirmed reports speak of at least three houses and two warehouses that have been burned down.

Locals told state broadcaster ERT that they had to spend 1.5 hour inside the sea water, waiting to be evacuated. Local publisher Giannis Sinanis said that he was heading to Vatera to cover the fire when he had to abandon his car with all his equipmewnt and started to run away as the fire was coming closer. After several kilometers he covered on foot, he jumped into to sea to save himself form the flames. He was later picked up by a coast guard boat.

Local politicians reportedly stated that there is a strong suspicion of “arson on purpose” as three fires started at a distance of over 500 meters from each other. 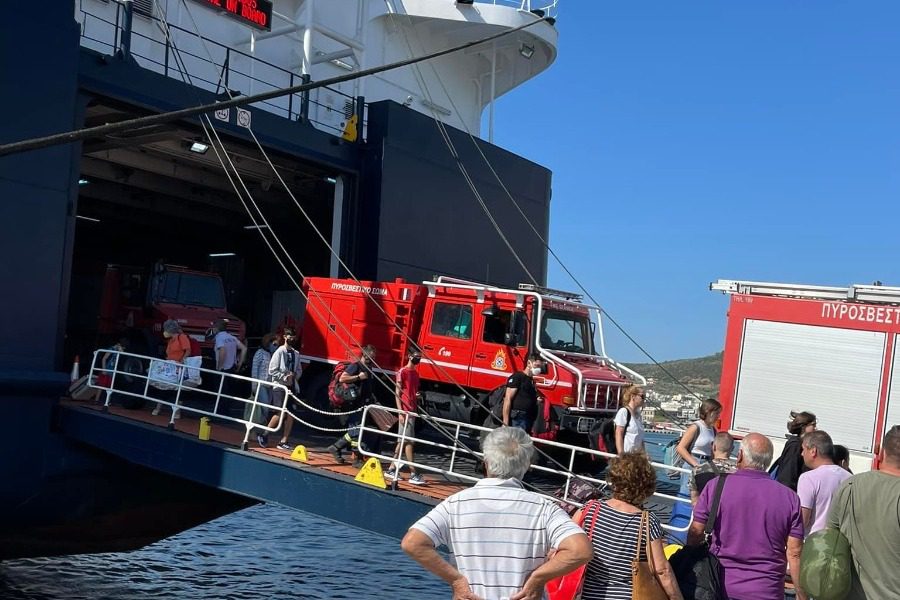 A total of 81 firefighters in 20 fire engines operate in the area, teams on foot, civilian volunteers, army units, and water tankers. 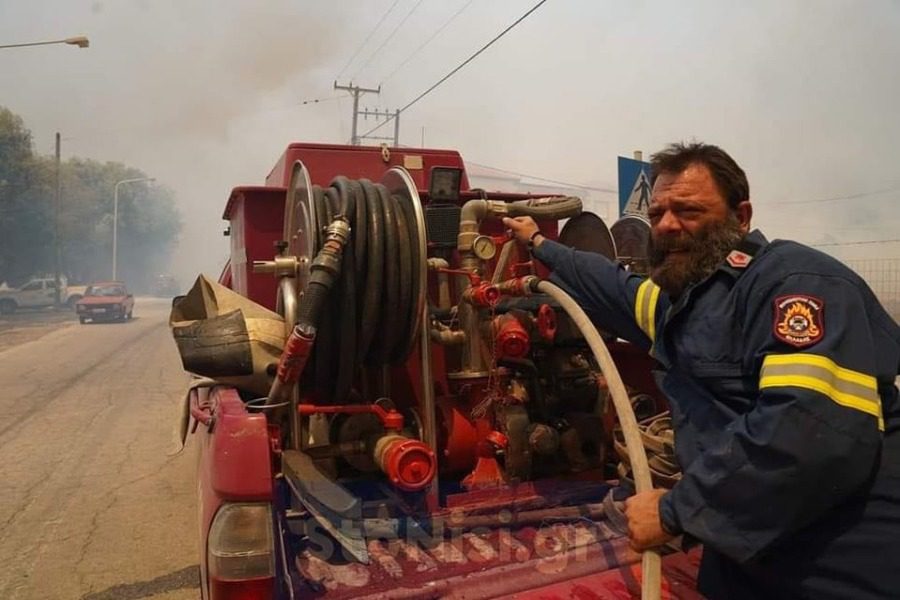 Among the civilians fighting the blaze are also two priests: Papa-Stratis from Ambeliko and Papa-Giorgis from Afalona (here on the pictures) reports local media stonisi. 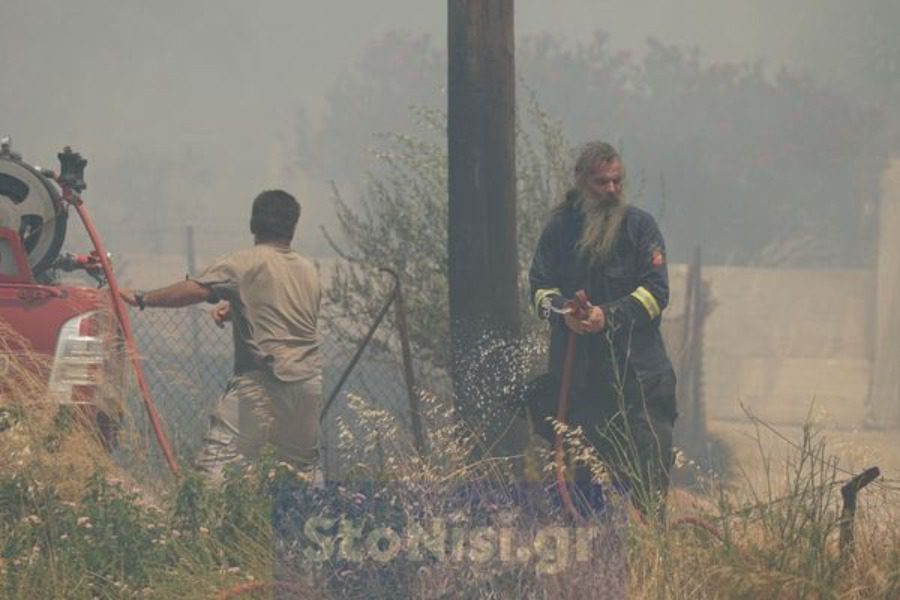 Civilian-volunteers from all over the island of Lesvos have moved to the fire fronts to help contain the blaze. 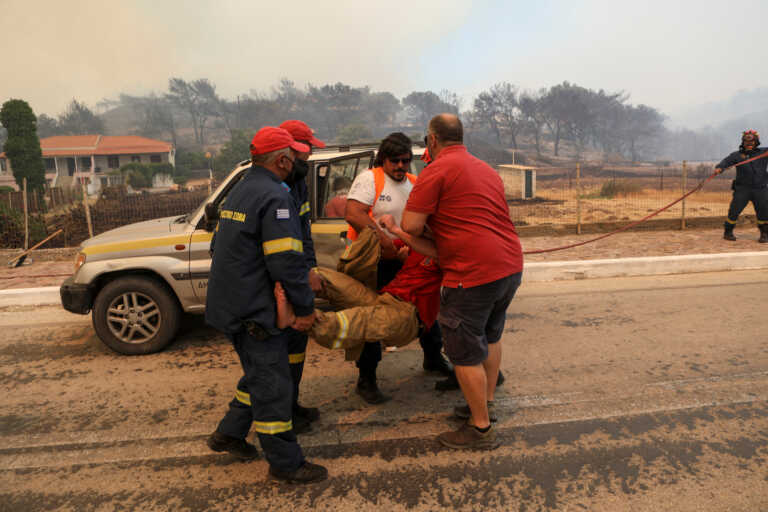 Over 450 people were evacuated from two hotels 92 houses in the area. 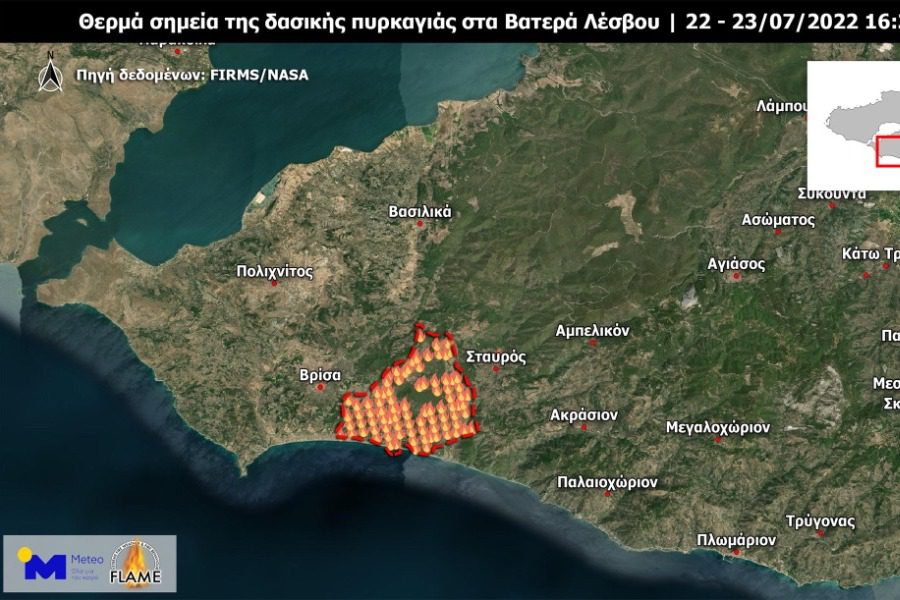 Satellite picture of the Vatera Fire edited by meteo.gr

Accoridng to first estimations, the blaze has burned around 13,000 acres.

In Western Macedonia, the fire has been burning since Wednesday and is threatening the Valia Calda National Forest.

Firefighters are focusing toe combat the fires nearing the village of Dadia and the National Park, home of one of the most unique ecosystems worldwide, home of rare fauna and flora, including rare bird species, mainly vulture, under threat.

The sudden shifts in the wind direction keep creating new blaze fronts, of which there are now five, Dimitris Petrovits, the governor of the regional unit of Evros told state-run news agency amna.

The fire has already gone past the raptor birds observatory and is closing on on the buildings of the Protected Area Management Unit.

Petrovits said that collecting and treating injured animals is also a very high priority for authorities.

The Ministry of Environment and Energy, along with several NGOs, are going to create an emergency station for the treatment of wildlife. The World Wide Fund of Nature (WWF) and volunteer veterinarians are already treating animals brought in by firefighters and civilian volunteers battling the blaze.

Residents in the village of Dadia were ordered to evacuate late on Saturday night, but firefighters managed to halt the flames before reaching the village.

320 firefighters in 68 fire engines fighting the fire have been augmented by civilian volunteers, army units and local authorities’ water-carrying vehicles. During the day, ten water-dropping planes and seven helicopters joined the efforts.

Firefighting aerial means operate only during the day light. 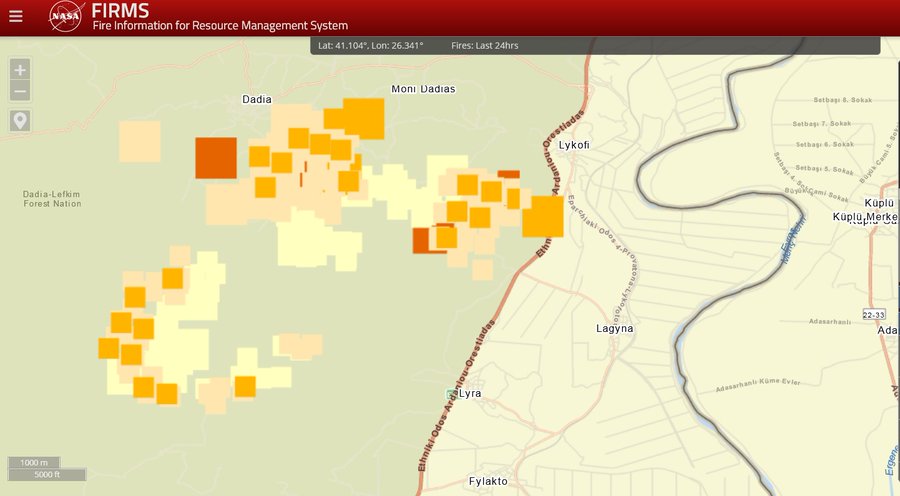 Map of active fire fronts – one of them has reached the river of Evros, the natural border to Turkey.

Minister of Civil Protection Christos Stylianides and deputy Environment Minister Giorgos Amyras visited the area on Sunday and … “promised” to be “more effective” in combating the fire.

“Our goal is to be more effective and to save the National Forest of Dadia and to open anti-fire zones,” Stylianides was cited by local media evrosnews, while the blaze has been raging since Friday!

So far, it is the Army and the firefighters on the spot are opening anti-fire zones but apparently the Minister wants to open them either now inside the burning forest or maybe next year or the year after, in hope to keep his post also in the fires to come….

Meanwhile in Western Macedonia, the fire that has been burning since Wednesday is threatening another National Forest, the Valia Calda.