Breaking News
Home / News / Politics / Greece / Police brutality against protesters; they even use teargas at people on wheelchair (videos) 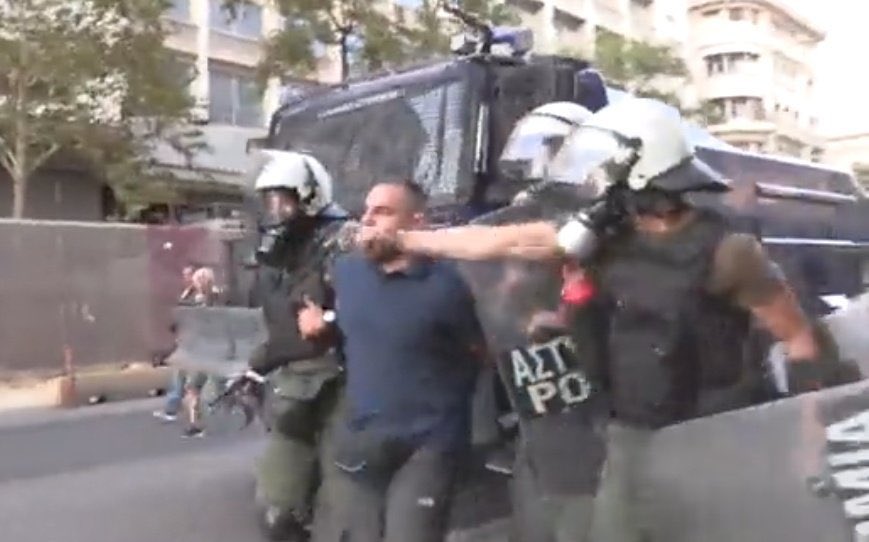 Police brutality against protesters; they even use teargas at people on wheelchair (videos)

Riot police was filmed and pictured using extensive violence against protesters in downtown Athens on Thursday evening.Officers were seen brutally beating demonstrators, photo-reporters and journalists and did not hesitate to fire tear gas even against a man on wheelchair.

On Friday, the Greek Police ordered an internal investigation against several police officers and deployed them to other posts until its conclusion.

Some 500 demonstrators gathered outside the Athens University to protest the rejection of the prison release of Yannis Michailidis, an anarchist, on hunger strike since May 23,2022. The 36-year-old man serves a 16-year prison sentence for a bank robbery. his doctors and his lawyers have appealed for his release, however, the justice council rejected it with the reasoning that he has not been “corrected”, citing his prison break in June 2019. He was located and arrested 6 months later.

*a man who had fallen on the ground to be kicked by a police officer, he was reportedly trying to flee the teargas and the water-cannon.

*a citizen who is been brought by a riot squad and is being led into the police bus, while police officers are holding him and handcuffing him. Then, another policeman comes from the side and punches him in the face.

*riot police attacking photo-reporters and journalists recording the protest rally and despite the fact they informed them that they work for media and do their job.

In a lengthy statement, Greek Police said announced the conduct of an administrative examination “for incidents that are reproduced on websites and social media for disciplinary offenses by police officers against citizens.”

At the same time, Police speaks of “successive attacks by groups of people with bats, poles stones, marble pieces and other items against police officers.”

The statement added that one officer in charge of the order measures was initially injured in the leg, then thrown to the ground by a group of individuals who kicked him multiple times all over his body. The officer was transferred to hospitals where he was diagnosed with chest and limb injuries.”

According to the statement, “after the end of the march, groups of people caused damage to shops and infrastructure in the center of the city”

14 protesters were detained, and four of them were arrested with charges for the offenses of resistance, disobedience, disturbing the peace, simple and dangerous bodily harm, insult, as well as for violations of the weapons law, the statement by the Greek police concluded, reported newspaper ethnos.gr