Breaking News
Home / FEATURED / PM Mitsotakis tells Turkey: “The Treaty of Lausanne will not be revised” 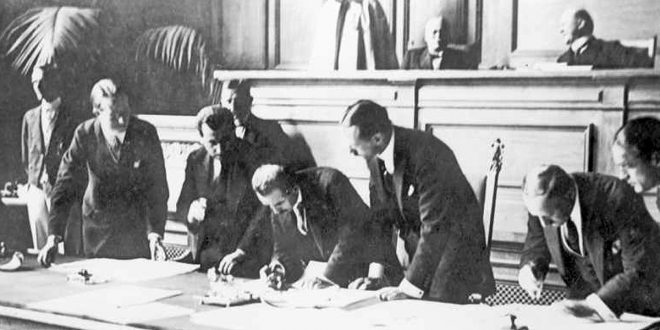 PM Mitsotakis tells Turkey: “The Treaty of Lausanne will not be revised”

Prime Minister Kyriakos Mitsotakis sent a clear message to Turkey and its efforts to revise the Treaty of Lausanne, saying that the Treaty that set the boundaries between the two countries in 1923 “will not be revised.” He added that  “the one century of the validity of the Treaty will be succeeded by many more.”

Speaking at the opening of an event dedicated to the 00th anniversary of the Asia Minor Catastrophe at the Benaki Museum late on Wednesday, the PM accused Turkey that it has violated the Lausanne Treaty by uprooting Greeks in Istanbul and the island of Imbros and Tenedos.

“Since then, the Treaty of Lausanne has governed our coexistence with our neighbours. And this, despite the fact that Turkey has violated it by uprooting the Greek element of Constantinople [Istanbul], Imbros and Tenedos. But it is still undermining its clear regulations, challenging our sovereign rights,” Mitsotakis underlined.

He stressed that “the other side of the Aegean should realize, however, that the nearly one century of validity of this Treaty will be succeeded by many more. This is what History and Geography, legitimacy and international stability require. Greece guarantees and will guarantee its observance, with the shield of diplomacy and its alliances, but also with the deterrent spear of the Armed Forces. Above all, however, with its uninterrupted march towards progress. Because the real confrontation each country faces is with its past and its future.”

Praising the contribution of Greek refugees from Asia Minor and Pontus Greeks to the rise of Greece at that time, Mitsotakis said that every great setback can be followed by a greater national success.

Today, the “Great Idea” is not associated with geographical gains but with building “the strong and self-sufficient homeland of our future. The one that does not forget because, precisely, it wants to move forward,” the PM stressed.

More information on the Treaty of Lausanne here.