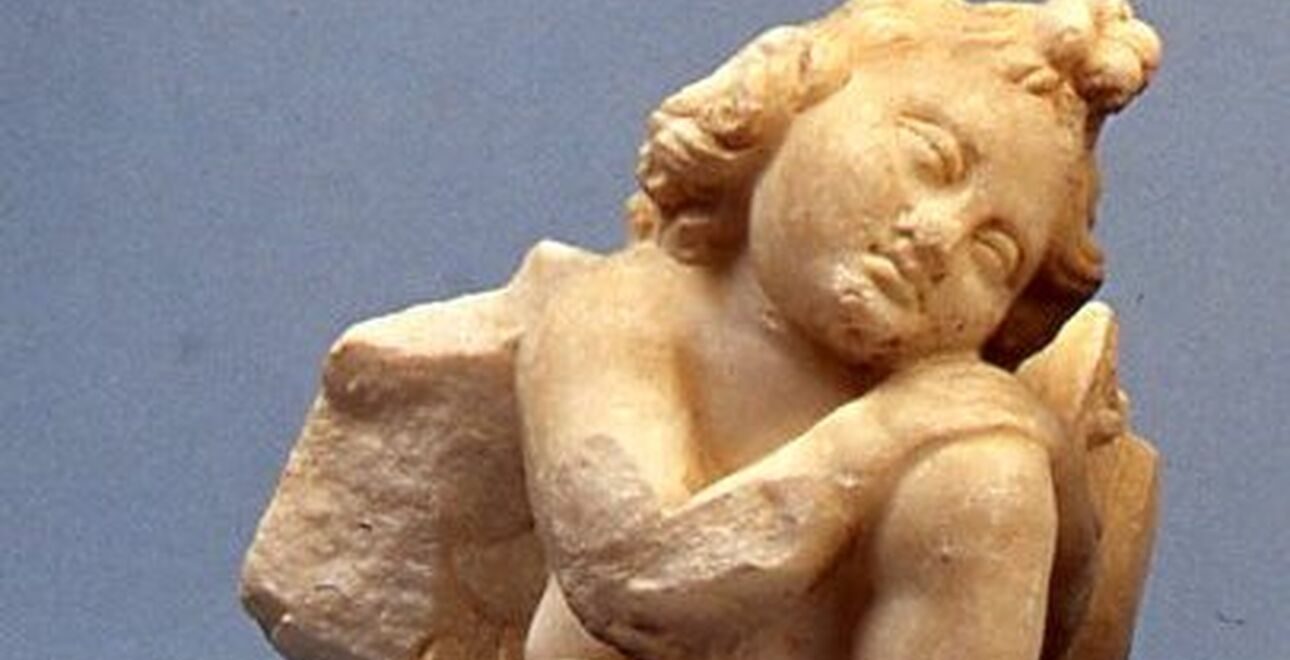 “Two Little Eros from Smyrna”: Two masterpieces of the ancient Greek world are to be displayed at the National Archaeological Museum in Athens for the first time ever. Occasion for the first exhibit of the Two Little Eros form Smyrna in autumn 2022 is the completion of a century since the Destruction of Hellenism in Asia Minor. 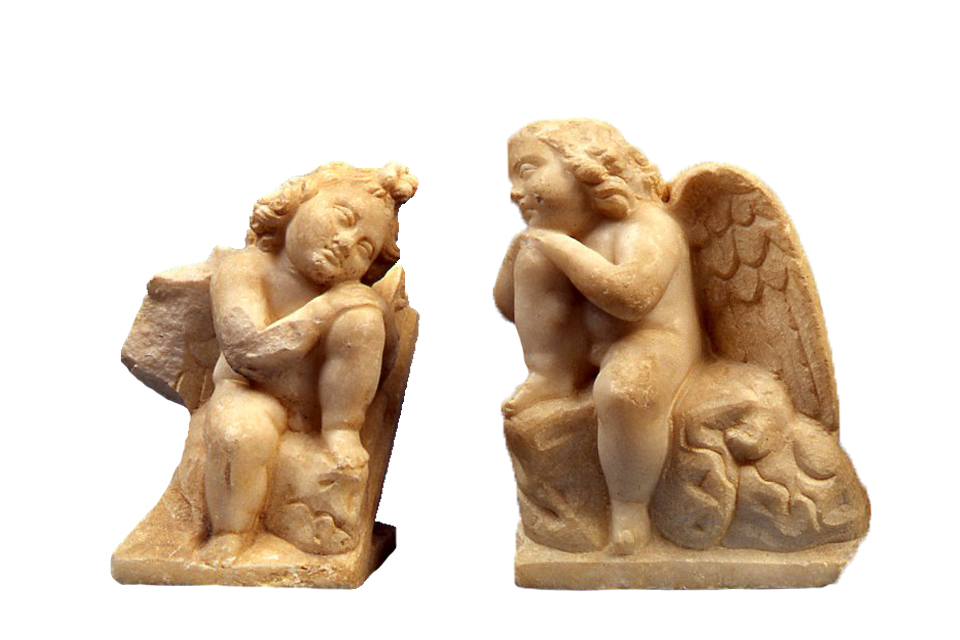 Two little marble Erotes have fallen asleep while seated with one leg resting on the ground. Their heads rest numbly on the bent knee, the palms of both hands serving as a pillow. They have round faces with chubby cheeks, and long hair braided along the top of their heads. Their body and limbs are plump.

The pictorial type of sleeping Eros was especially popular in antiquity, as early as the Hellenistic period.

The two small marble statues of seated and sleeping Eros used to decorate the lid of a luxuriously gabled sarcophagus dated ca. 150 AD (2nd century AD) and thus from the times where the workshops of Docimio, an ancient site near Afyon Karahisar in today’s Turkey.

The kind of marble used, and the decoration of the cornices, lead to an attribution of the sarcophagus to the workshop of Dokimeion in Asia Minor, a marble-working facility particularly known for the production, but also for the export of luxury sarcophagi, notes the National Archaeological Museum. 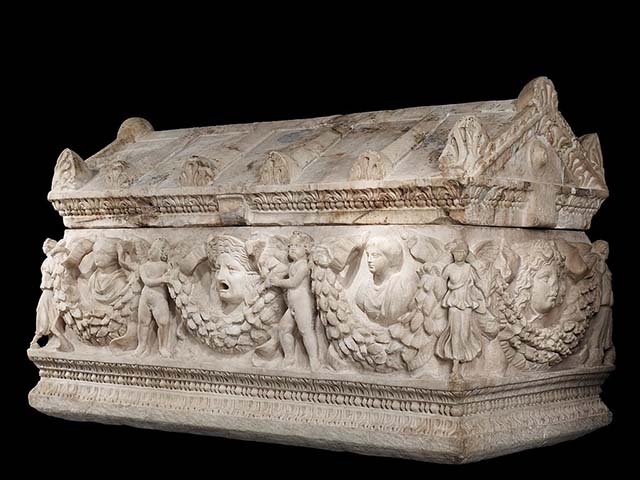 Docimium, Docimia or Docimeium, was an ancient city of mountainous of Phrygia. It may have been founded by the Macedonian officer Antigonos Dokimos in the 4th century BC. 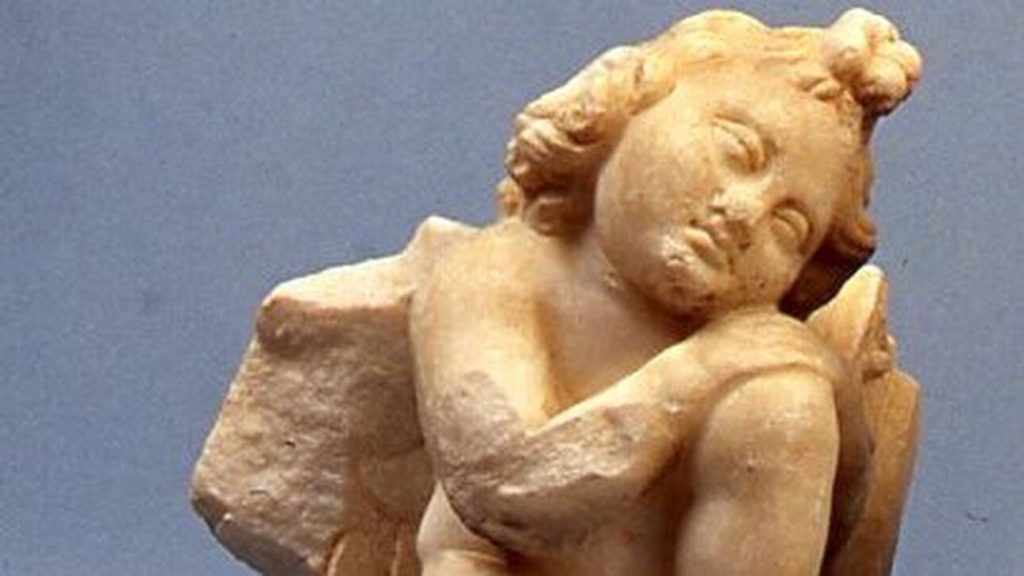 The two Eros were bought in August 1883 by the by the Archaeological Society at Athens from the antiquities shop of K. Polychronopoulos in Smyrna in 1883. 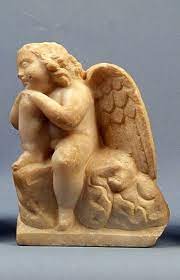 Since the end of 19th century, they were kept in the warehouses of the National Archaeological Museum.

Graphic restoration of the position of the two small Eros of the National Archaeological Museum on a sarcophagus cover that is in San Lorenzo fuori le Mure, Rome.

“The representation of young Erotes, asleep in a seated position, as acroteria on sarcophagus lids, is particularly rare. It perhaps indicates the need to reconcile oneself with the idea of the end of life as something that could be assimilated to the sweetness of a child’s sleep,” notes the Museum.

The two statuettes served as acroteria (sculpted corner decoration) on the gabled lid of a marble sarcophagus with moulded cornices. It is not known when the figures were sawn off the lid, and polished, to be sold independently.

The two little Eros from Smyrna are presented, for the first time, in the heart of the museum (“Aithousa tou Bomos” / room 34), from Wednesday, October 12 to Monday, December 19, 2022.

On October 23, November 13 and 27 and December 18, Sunday, as well as October 26 and November 9 and 30, Wednesday, at 1 p.m., museum archaeologists welcome visitors to the exhibition area and talk to them about the Asia Minor sculpture workshops of antiquity, the symbolism of the Eros in the art of death, as well as the activity of Greek archaeologists in Asia Minor during the Greek Administration of Smyrna and the fate of the great collections in the days of the Catastrophe.

The exhibition of the seated Eros is part of the actions of the so-called “Invisible Museum” of the National Archaeological Museum that displays selected rate and unknown antiquities from the warehouses of the Museum.

In order to attend the scheduled presentations, it is necessary to purchase a ticket and to register at the time of attendance. First come first served.