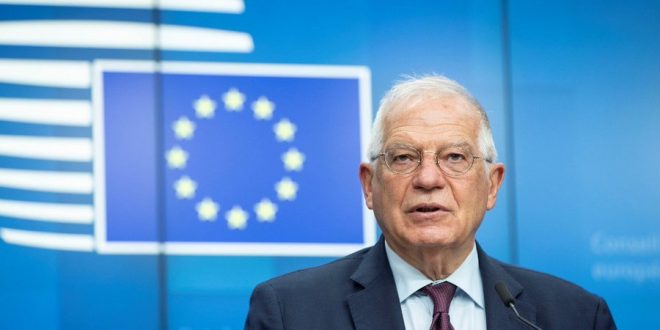 European Union foreign ministers decided on Monday to impose sanctions on Turkey if Ankara’s actions and provocation continue against Cyprus. At a meeting in Luxembourg on Monday, the Foreign Affairs Council has called on the EU High Representative for Foreign Affairs and Security Policy Josep Borrell and the European Commission to draw up proposals for sanctions against Turkey in light of its unilatetal actions in the town of Varosha in occupied northern Cyprus  and the harassment of the Nautical Geo research ship within Cyprus’ Exclusive Economic Zone.

The EU foreign ministers agreed that they would ask the European External Action Service to prepare an options paper, which is both an analysis of the situation and a proposal for a series of measures the Council could consider if it wishes to take a decision.

After the meeting, Josep Borrell described as “unacceptable” Turkey’s intervention against European ships.

He added that Turkey’s behavior creates tension in Cyprus and undermines the resumption of negotiations for the settlement of the Cyprus problem. He also expressed his solidarity with both Cyprus and Greece.

He concluded that it was agreed to instruct the European External Action Service and the European Commission to prepare options with proposed measures against Turkey, which will be decided by the member states.

Greek Foreign Minister Nikos Dendias stressed that the European Union must clearly set out the limits of what it is prepared to tolerate, in light of Turkey’s provocative behavior. He stressed that, as the other member-states show solidarity with Belarus’ actions, there must be solidarity with Cyprus.

The proposal was adopted by acclamation by the Council, as at least nine other member-states strongly supported it, with no country objecting.