BREAKING NEWS – 3 DEAD due to Molotov cocktail at Bank

May 5, 2010 Economy, News, Politics, Society, Uncategorized Comments Off on BREAKING NEWS – 3 DEAD due to Molotov cocktail at Bank 167 Views 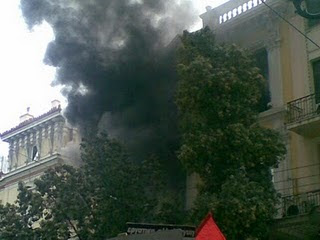 According to international media and Greek Sky TV

THREE PEOPLE HAVE DIED IN A BLAZE that broke out at MARFIN EGNATIA BANK, on Stadiou Street, downtown Athens.

The fire started when demonstrators hurled  Molotov cocktail fire bombs at the Bank. SKY-TV reports that the 3 bank employees were burnt to death. They were trapped in the stairwell of the 3rd floors while trying to flee the fire broken out  two floors below. Four people – one with broken bones, 3 with inspiratory problems – are treated in nearby hospitals.

Reports have it that angry demonstrators threw stones to the fire brigade coming in.

There are reports about fire at Finance Ministry-depts, burnt cars & shops, smashed windows. The van of  turkish NTV private channel was also set on fire. Clashes between demonstrators and plice are continueing.

So far no information about injured peple or arrests. Information flow is hindered today since  Greek Media are also taking part to the general strike.

Tens of thousands angry Greeks demonstrate in Athens protesting the harsh austerity measures and severe cuts on salaries and pensions as well price increases in electricity and extra taxes. The slogans are against the  politicians, the police and the journalists. People demand “Give the Stolen Money Back”.  People demand  property confiscation of corrupt politicians  and that those respomsible for the economic crisis should go to jail.

The Greek government  announced Sunday  drastic public spending  cuts in order to get bailout loans  of 110 b. Euro from EU & IMF.