Epiphany-Celebrations Turn into Protests Against Politicians by “indignant” Believers (video)

The first politicians who got to hear the anti-government slogans was Education Minister Anna Diamantopoulou and Athens Major Yiorgos Kaminis. The two had joined the Epiphany Celebrations in noble Athens district Kolonaki. But while the priest of Agios Dionysios Church was blessing the waters in a symbolic act, the few believers who had gathered to attend the ceremony started chanting slogans: “Well eaten and well digested” shouted an indigant believer shouted with an ironic hint to corrupted politicians. And “Bring back the money from the off-shore”. But Anna Diamantopoulou is a cool woman and she wished that Greece will secure its position within the eurozone in the next four months…

Almost at the same time in Chalkida, the President of the Greek Republic Karolos Papoulias was becoming the target of angry protesters.

Protesters demanded that Papoulias would leave the ceremony and resign from his office.

The President stayed only for 20 minutes and he withdrew without making any comments to reporters. Police detained six protesters. 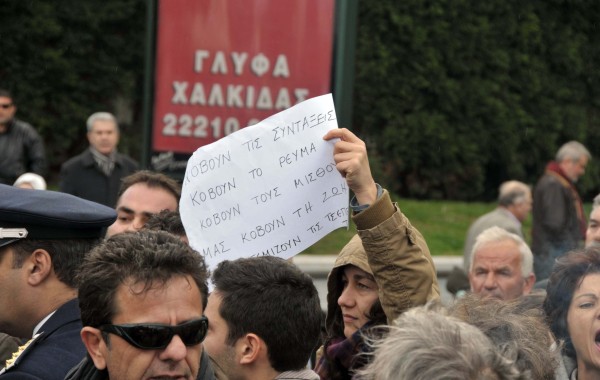 Protester in Chalkida: “They cut pensions, they cut power, they cut wages. They cut our lives. They fill up their pockets”

Last October in Thessaloniki, Papoulias and the government had to cancel the 28th-October parade, as outraged protesters chanted insulting slogans against him.

The Archibishop of Greece, Ieronymos, got also target by ‘indignant’ believers as he was blessing the waters at the port of Piraeus surrounded by many members of the cabinet and the parliament. Among others, workers chanted slogans demanding new factories and combat the unemployment. People were chanting “Where is the Church during the crisis?” Archibisphop Ieronymos commented on the slogans “People are tired, we have to stand by them.” 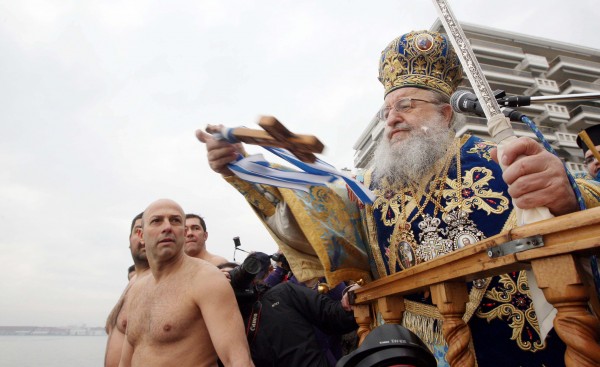 Epiphany in Piraeus – Metropolit Amvrosios throwing  the Cross in the Water

I’m afraid this day will go into history as the Epiphany of the Anger….