Finally German Chancellor Angela Merkel can see clearly things in their real dimensions. In lenght, width and depth. With the help of 3D glasses, Angela Merkel managed the optical breakthrough. However she saw only two dimensions of the Greek Debt, despite the 3-dimensional aid.  Merkel saw that neither the Memorandum of Understanding between Greece and its lenders, nor the strict austerity helped the country. 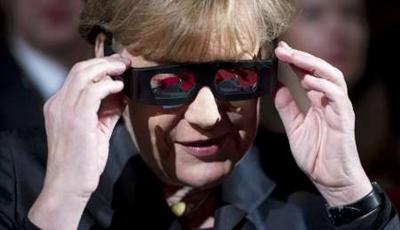 Merkel Sees Through the Greek Debt with 3D Glasses

In an interview to British Guardian and five other leading European newspapers, “Angela Merkel has cast doubt for the first time on Europe’s chances of saving Greece from financial meltdown and sovereign default, conceding that Europe’s first ever multibillion bailout coupled with savage austerity was not working after two years of crisis that has brought the single currency to the brink of unravelling.”

Keeping her own tail outside the sphere of responsibility Merkel said further “We haven’t overcome the crisis yet. Of course, there’s Greece, a special case where, despite all the efforts that have been made, neither the Greeks themselves nor the international community have yet managed to stabilise the situation.”

Asked about the European response over the past two years, during which Berlin has often dictated terms and encountered strong resistance in Brussels, Paris, and at the European Central Bank in Frankfurt, Merkel said: “Good politicians always have doubts, as a way of constantly reviewing whether they are on the right track.”

Despite the strong reactions by her EU partners, she insisted that the European court of justice (ECJ) be empowered to police the public spending and budget policies of the 17 countries in the euro.

In a sudden attack of dizziness -she wore the 3D glasses longer than allowed – Merkel called for the creation of a European political union, with many more national powers ceded to a central government, a strengthened bicameral European parliament, and the ECJ assuming the role of Europe’s supreme court.

“My vision is one of political union because Europe needs to forge its own unique path. We need to become incrementally closer and closer, in all policy areas. Over a long process, we will transfer more powers to the [European] Commission, which will then handle what falls within the European remit like a government of Europe. That will require a strong parliament. A kind of second chamber, if you like, will be the council comprising the heads of [national] government. And finally, the supreme court will be the European court of justice. That could be what Europe’s political union looks like in the future – some time in the future, as I say, and after a goodly number of interim stages.”

PS Rumors have it that Angela Merkel would additional need a of 6D glasses to see the impact of the MoU on the Greeks, her own responsibilities in the disaster of the South European countries and the number of EU-skeptics that increases just because of her megalomania and the application of her anti-democratic ex-DDR policies.