This is the never ending confusion-story of the emergency property tax that skyrockets the electricity bills every month and forces Greeks to pay exorbitant amounts to avoid power outages. On Wednesday, Greece’s Supreme Court annulled the ban of a first instance Athens court that had ruled “the collection of emergency property tax through electricity bills was illegal.”

“Public interest” in the mind of Yiannis Stournaras is collecting an enforced extra poll levy of at least 700-800 euro per year, not matter whether people have money to fill their bellies, heat their homes or enjoy the luxury of electricity.

As monthly electricity bills reach exorbitant levels, many households are not able to pay this amounts with the effect that Greek Public Power Company cuts off the electricity. 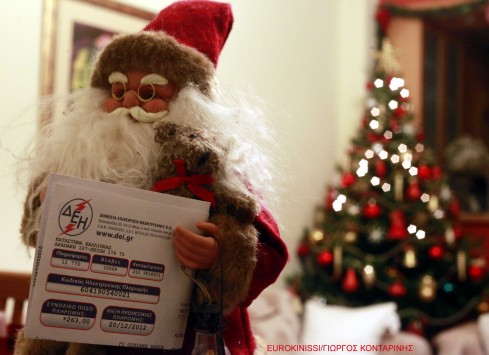 A household living in 100 sqm home has to pay an average of 160 euro per month in a bill including electricity consumption, several municipality fees, regular property fees and emergency property tax.

The worst thing of all is that PPC does not measure the consumption on a monthly basis but every four months. This has the effect that subscribers pay “estimated” amount on a monthly basis, but every fourth month a brick hits them right on their heads: for the month of December many households were called to pay an average of 400-500 euro incl one E.P.T, tranche, for the “final quarterly bill” for the time between July 20-November 20th.

Furthermore, Greek PPC (DEH) will increase electricity prices as of 1.1.2013 at rates up to 48%! That will be an “additional 15 euro per month” said the CEO of PPC yesterday but he refrained to mention that for his salary of several thousands euro per month that’s equal to a bag of peanuts.

Nevertheless, the issue of legality or not of the ’emergency property tax’ is not over as end of March 2013 the Supreme Court will have to decide for one more time whether it is conform with the Constitution or not. Last winter the Supreme Court had ruled, the E.P.T. was according to Constitution as long as it would not be collected for more than two years.