Hit by an unprecedented crisis, Cyprus Popular Bank (Laiki) announced on Thursday night, it imposes a daily cap of 260 euro per customer for withdrawals from ATM. This restrictions aims to facilitate the bank to come up with customers’ demands, it was said.

Thousands of CPB queued at ATMs on Thursday after rumors claimed the bank would be shut down. 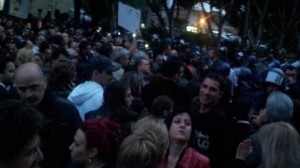 CPB employees & customers protest outside the Parliament shouting slogans “Troika get out of Cyprus” and “Hands off from Popular Bank”.

Late Thursday, the governor of Central Bank of Cyprus dismissed the claims of the bank shut down and announced the reconstruction of CPB.

That is the CPB will be split into ‘good‘ and ‘bad’ bank. Bank of Cyprus will take over the good bank (i.e. served loans and deposits up to 100,000 euro as they are guaranteed by EU law.

CPB will be the bad bank. It will keep its customers deposits over 100,000 euro and the bad loans, hoping to recover one day… the deposits to remain in the bad bank are estimated to be 6-12 billion euro.

Reconstruction measures will be taken for the bad Cyprus Popular Bank, if it does not manage to recover, it will go bankrupt – and its customers with deposits of more than 100,000 will see their money disappear in the labyrinths of bad management.

PS so far, I have no information that the same cap would e imposed on the Greek branches of CPB as well. Most probably, unless Stournaras will come up with his famous secret Plan B.