President Karolos Papoulias raised the issue of World War II reparations to his German counterpart Joachim Gauck currently on a 3-day official visit to Athens. But as expected, Gauck repeated the official legal position of Berlin and promised to express his

Karolos Papoulias told Gauck hat Greece has not dropped its compensation claim over the Nazi atrocities and the enforced loan by the Nazi occupiers during the World War II.

“I want to point out that Greece has never given up its claim of German reparations, ” Papoulias reportedly told Gauch at a private meeting in Presidential Manson adding “it is necessary to solve the problem with the earliest possible start of negotiations.”

On his part, Joachim Gauck reportedly spoke of German “atrocities”, of mistakes that have been made in the past.

“I can not take another position than the legal position of the Government of Germany . What I do is , when we [Gauck and Papoulias] get together in Ioannina, to find words and acknowledge the guilt of Germany towards the victims of the area. Guilt is not only material, it has also a moral dimension. In Germany there is a wrong development. Many things have been forgotten. There is a moral obligation. I will show the way. The horrors of Nazism should remain in our memory,” Gauck told Papoulias. 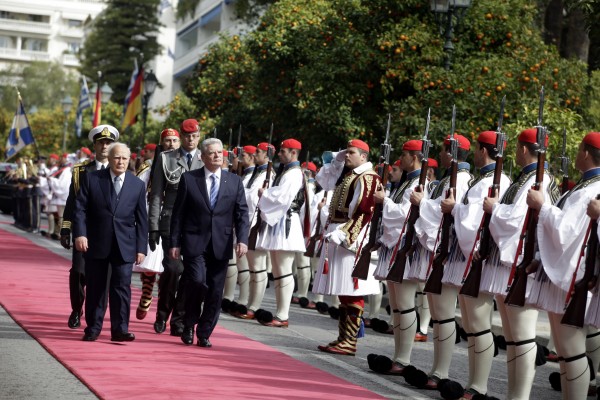 On Friday, the two presidents will travel to the home town of  Papoulias Ioannina in Northern Greece to pay tribute to victims of the Nazis in Ligkades village, where the Nazis executed 92 people in October 1943.

The Greek President informed his German counterpart on the economic crisis and spoke of the vicious cycle of recession and unemployment, especially among the youth.

The German President expressed his solidarity with the Greek people, acknowledging that sacrifices have been made in the effort to boost the economy through structural reforms. “I want to express my recognition and my respect to those who endure the reforms,” Gauck said repeating the cliche of the famous light at the end of the equally famous dark tunnel.

Gauck will meet also with main opposition party leader Alexis Tsipras from left-wing SYRIZA. The meeting will be attended also by WWII resistance fighter Manolis Glezos, whose main aim is the issue of WWII reparations.

PS and when German President Gauck will officially acknowledge Germany’ guilt in Ligkades village, we will proudly announce, that they all lived happily ever after….