Young businessmen discuss with Merkel the obstacles in Greek entrepreneurship

April 11, 2014 Economy Comments Off on Young businessmen discuss with Merkel the obstacles in Greek entrepreneurship 85 Views

Young Greek entrepreneurs put it as clear as they could: transparency in funding, tax incentives, less bureaucracy and reduced taxation. During the one-hour discussion with German Chancellor Angela Merkel representatives from successful Greek startups and small & media businesses used their once in a lifetime chance to report about the mishaps  and setbacks in the Greek entrepreneurial sphere that make growth and development as difficult as possible. 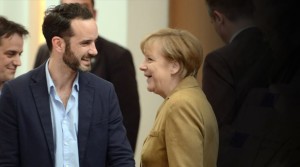 The young businessmen pointed out the lack of transparency in the entrepreneurship funding as one of the obstacles and stressed that transparency must be ensured so that the money will not always go to the same companies, multinational or not. They also expressed their disappointment about the lack of liquidity, high energy cost, lack of tax incentives. That is, problems that any young or old entrepreneur faces in Greece of austerity and loan agreements.

Representatives of Greek startups proposed also a new corporate form for technology companies, a so-called “common European business”. No further details have been reported by the Greek media.

After the meeting, the businessmen complained to reporters “We cannot easily develop and expand to Europe because Greece is putting obstacles.”

PS Of course, it does. Greece has still commitments and obligations towards its international lenders and tax revenues are high in demand. I think that the startup that will develop a platform and a software to automatically collect taxes from any soul aged 0-99 breathing in Greece, will be top in government funding. Oh wait! And zero interest loans from the banks.