Standoff escalates, as Greece’s EU-partners pull their Most Lethal Weapons

The bailout standoff between Greece and its creditors has reached an unprecedented escalation with the default clock ticking. Two weeks before the key €1.5-billion payment to the IMF on June 30th that threatens Athens with a “credit event”, the two sides do not seem able to reach an agreement that could supply the debt-ridden country with fresh money so that it can meets its obligations to creditors. However there is absolute “radio silence” between the two sides, with no exchange of papers, with no any direct communication, apart from the signals transmitted via the international and national media.

In one voice international creditors EU, ECB and IMF and pro-austerity opposition parties Nea Dimokratia, To Potami and PASOK urge Prime Minister Alexis Tsipras to reach an agreement as soon as possible.

But the Greek Prime Minister is also under immense pressure from his own party left-wing SYRIZA, urging him to stick to the “red lines” and some like the Left Platform to even call on him to rift away from creditors demands.

Despite the meanwhile famous “some progress” in the negotiations process, creditors insist on the same strict austerity ignoring the needs of a economically drained society after five years of fiscal adjustment program. Each and every Reforms Plan submitted by Greece, creditors reject it claiming “not sufficient.” According to the latest negotiations stand over the weekend, the difference between Athens and its creditors was “austerity of additional 2 billion euro on annual basis ” till the end of the days.

But the problem is not just that. There is also disagreement among the creditors, with the IMF wanting a debt restructuring and Germany opposing it. Of course. Because if Greece would get a second debt restructuring, can you imagine the demands of the other bailout countries in the eurozone?

The Labyrinth of negotiations create a new Greek flag 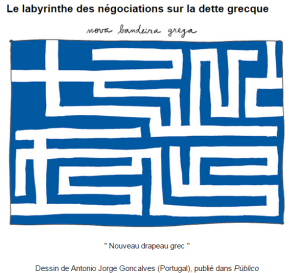 After the negotiations collapse on Sunday evening, talks remain “frozen” as of Tuesday noon. Greek media report that PM Tsipras launching a new initiative to seek a political solution on the problem. According to latest information, Tsipras plans a teleconference with German Chancellor Angela Merkel and French President Francois Hollande later on Tuesday, but also to hold talks with other high-ranking EU officials. At the same time, he holds talks with Greek political party leaders.

The creditors are on hold awaiting from Athens to submit an updated reforms list, “a solid reform package,” as a conservative lawmaker from Merkel’s party told Reuters. However, Finance Minister Yanis Varoufakis told German tabloid BILD – which is close to CDU/CSU – that “Greece has no plans to submit any additional reform list” at the Eurogroup meeting scheduled for June 18th. For a simple and logical reason:

“The Eurogroup is not the right place to present proposals which haven’t been discussed and negotiated on a lower level before,” Varoufakis told BILD and called on the European Commission, European Central Bank and the International Monetary Fund to come back to the negotiation table “with a clear, robust mandate.”

Greece has repeatedly said that it will not accept cuts in pensions and poverty benefits. It also opposes labor market reforms however it offers a long reforms list of proposals aiming to bring revenues via combating tax evasion and a series of other measures.

In the economic warfare against Greece, the country’s EU-partners have pulled out their most lethal weapons, including this of a Greek exit from the eurozone, even if it is not legally possible. The creditors’ arsenal includes also “capital controls”, “parallel currency”, “contingency plan”, “state of emergency”, “Plan B”, “default within the eurozone”, “Grexit is automatic EU-exit” or even some absurd claims of “halting of EU funds and subsidies in case of Grexit.” Scenarios in all possible and impossible combinations.

“Germany’s Suddeutsche Zeitung reported that the creditors are drawing an ultimatum, threatening to cut off Greek access to the European payments system and forcing capital controls on the country as soon as this weekend. The plan would lead to the temporary closure of the banks, followed by a rationing of cash withdrawals.

Syriza sources have told The Daily Telegraph that Greece may seek an injunction from the European Court of Justice to stop the creditors and the EU institutions acting in a way that breaches its treaty rights. This would be an unprecedented move, greatly complicating the picture.” (Daily Telegraph)

As the bombshells fall daily on Greeks’ heads, members of the local middle-class who have still money at the banks some seek their way to the banks and reportedly withdraw their deposits to hide them under the mattress. Economic media report of amounts between €10,000 and €30,000 leaving the banks’ counters. Logically, those with big amounts have most likely sent their money abroad – and thus: long ago.

There are currently media reports of an emergency EU Leaders Summit on Greece on upcoming Sunday, but much will depend of the outcome of Thursday’s Eurogroup.

At the moment Greece and creditors seem to pull the edges to the extreme. Is it a bluffing? Is it serious? Is it part of the game? Is it Now or Never? Or Now or Until June 30th? Point is that both creditors and Greece know that they can go on with negotiations until the end of the month.

PS All I can advice you is: keep calm and go swimming