Sunday… Monday… Tuesday… Wednesday… Four very crucial days that will determine whether the average Greek will still be able to withdraw a couple of euro banknotes from the ATMs, whether the pensioner will be able to get hold of the whole of his July pension.  Whether the Greek banks will continue to stand as they did so far. President of the Greek Banks Union and former PASOK minister – Louka Katseli said on Saturday morning that

Speaking to private Mega Tv on Saturday morning, Katseli added that there is a big possibility that “banks will open on Tuesday or Wednesday for all transactions” however maintaining the capital controls and the withdrawal limit.

A day after Sunday’s referendum the European Central Bank will decided whether to raise the Emergency Liquidity Assistance for Greek banks.

Louka Katseli also dismissed the Financial Times article that a”haircut” of 30% in deposits with over €8,000 would be considered if Greece remains without ‘program’. For the ECB to continue the ELA “Greece in the program is a precondition.” 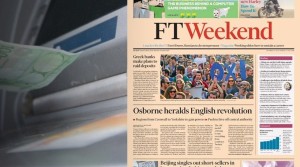 Citing “anonymous sources,” the FT claimed that Greek banks were considering to impose a “haircut” of 30% to deposits with over €8,000 and thus despite the fact that deposits up to €100,000 are guaranteed by the EU banking directives.

Citing bankers and businesspeople with knowledge of the measures, the Financial Times reported: “The plans, which call for a ‘haircut’ of at least 30 percent on deposits above 8,000 euros, sketch out an increasingly likely scenario for at least one bank”.

The report quoted a source as saying: “It (the haircut) would take place in the context of an overall restructuring of the bank sector once Greece is back in a bailout programme.” (via Reuters)

According to FT, the “Greece’s Deposit Insurance Fund amounts only €3billion which is not enough to cover up demands in case a bank collapses.” The “haircut on small depositors could be flagged as as one-off tax” in order to recapitalize banks.

Which one is this “at least one bank”? Maybe the one that had its ATMs “off operation” on Friday and its “customer service phone number” is out of order on Saturday morning?

To tell you the truth, in this frenzy of misinformation and scaremongering, hysteria and panic of the last days, weeks, months, years, meanwhile Greeks do not trust neither official nor unofficial dismissals of news, nor the news itself.

Nevertheless, if there is a bail-in then we can say that Dijsselbloem‘s dream of Cyprus template will come true. And then, do not tell me that the “orchestrated bank run” and the “ECB’s liquidity asphyxiation of Greece” were “not political”.