It was supposed to be some kind of witty remark. Too bad that the man who shot it is not known neither for his wit nor for his humor. German Finance Minister Wolfgang Schaeuble and Greek prime Minister Alexis Tsipras were sitting in a panel discussion in the World Economic Forum of Davos. All eyes were focusing on the two for obvious reasons. At one point the discussion was about the participation of the International Monetary Fund in the Greek fiscal adjustment program. 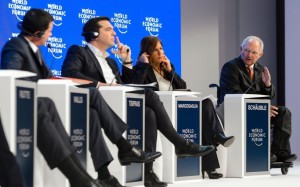 Wolfgang Schaeruble praised the “European solidarity” stressing however with a clear hint to Greece that “agreements have to be respected.”  – “Stick to the agreements” has been one of the mopst frequent German criticism to Greece.

And then Schaeuble shot the unbelievable. “It’s the implementation, stupid!” he said paraphrasing a sentence attributed to former US President Bill Clinton “It’s the economy, stupid!”

Back in Athens, government sources commented that that “the Prime Minister did not consider Schaeuble’s remark as “insult” and that the people’s reactions were “exaggerated.”

Insult or not Insult, the point is that Schaeuble formally struggled to speak out such a phrase in English. It was well-thought and badly delivered. 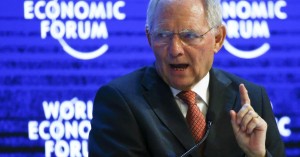