Seventeen policemen from the Netherlands arrived on the island of Lesvos on Thursday afternoon. According to local EmprosNet.gr, “the policemen arrived on a C-130 and are to be involved in the return of migrants and refugees back to Turkey,” as the EU-Turkey deal foresees. 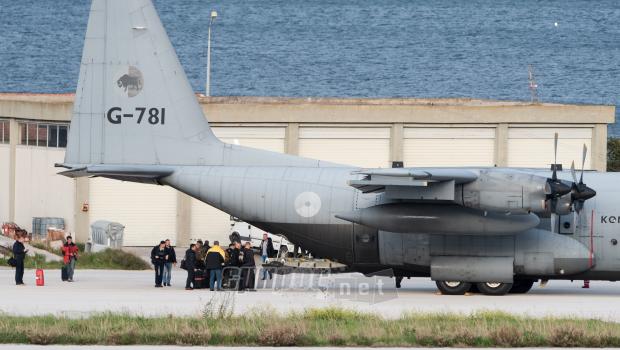 Citing local authority sources, EmprosNet reports that two policemen will accompany each refugee or migrant to Turkey, and that flights will go from Lesvos airport to the airport of Izmir. Greek state ERT TV said a couple of minutes earlier that “the return flights would land on Turkish capital, Ankara”, some 600 km away from the country’s the coast.

EmprosNet but also Greek state ERT TV reported that the first flight was scheduled for Friday noon, but it has been cancelled. The state broadcaster added that the return flights will be conducted “by an aircraft of a foreign country.”

Currently, there are some 1,100 refugees and migrants in the former Hot Spot of Moria that has turned into detention center after the EU-Turkey deal. These people who have arrived after the deal went into effect on March 20th, have reportedly received leaflets in English informing them that they are being “legally and temporary in detention” and that “they have the right to seek information about their rights, to get information from their countries and to seek a lawyer.” According to local lawyer, Eleni Velivassaki, the detainees are not informed about the new procedures that will send them back to Turkey.

Despite the EU-Turkey deal, refugees and migrants keep arriving on Lesvos, Friday morning it was two boats with a total of 120 people. The arrivals sharply decreased in the last two days, but it was most probably due to bad weather with winds blowing up to 8 Beaufort in the area.

On Thursday, the spokesman of Greek Refugees Coordination body, Giorgos Kyritsis, said that only very few of the 2,300 EU staff to assist Greece in the asylum procedures have arrived.

Why bother sending accompanying policemen, when EU-staff to do asylum procedures not here? I’d call it “Bad Coordination”!