Greek Prime Minister Alexis Tsipras blasted FYROM over the extensive use of violence against refugees and migrants on Sunday, when police and army units of the neighboring country fired teargas, rubber bullets and stun grenades for at least 5 hours within Greek territory.”It is a great shame for Europe,” Tsipras said during a joint press conference with Portuguese PM Antonio Costa in Athens on Monday.

“Faced with people who were clearly not armed and constituted no serious threat, they attacked with chemicals, with tear gas and rubber bullets,” Tsipras said.

“This is a great shame for European culture and for countries who want to be part of it, you cannot make use of European values a la carte,” Tsipras stressed and called on on the EU and the UN refugee agency UNHCR to take a stand as Europe struggles cope with its worst migration crisis since World War II.

PM Tsipras also blasted the s0-called “solidarity activists” for inciting refugees and migrants to actions that contain a lot of danger. Tsipras spoke of certain “solidarity volunteers”, of NGO representatives, and of “some with foreign nationality who have accommodation in FYROM and cross daily the borders to Greece.”

Tsipras said that “except of the objective difficulties, the government has also to deal with some NGOs that do the exact opposite job [of that they were supposed to do] and try to convince people to stay there, regardless of if staying there poses huge risks, because what they have in mind is not to offer but to get funds.” 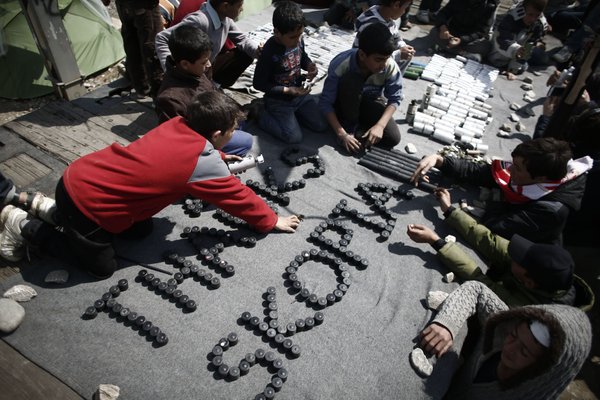 Refugee children in Idomeni send a message to FYROM – a message made of rubber bullets.