“Tomorrow is the anniversary! Tomorrow!” my aunt suddenly shouts as my cousin gives us a ride from a social obligation in the broader area of Piraeus. “What anniversary?” I ask and the aunt shoots back “The Block of Kokkinia!” I hear a tone of anticipation and even anger in her voice probably for the fact that I do not know.

“The Block of Kokkinia”(Raid of Kokkinia) is commonly known in English-speaking literature as “The Tragedy of Kokkinia” where the Nazis mass executed at least 350 civilians, all males aged 14-60, and sent thousands to the camps in Hitler’s Germany. It was Nazi’s reprisal for the Battle of Kokkinia five months earlier where the communist National Liberation Front (EAM) fought together with the people of Kokkinia against the Nazis and their Greek collaborators, the Gendarme and paramilitary troops. Kokkinia is on the same list of Nazi’s mass executions of civilians like in Kalavryta, Distomo…

On August 16th 2016, my cousin, my aunt and I drive through the noon-sleepy, sun-soaked narrow streets of Kokkinia, today known as Nikaia.

In this historic suburb of Piraeus, there still stand many of the old “prosfygika” houses, the houses of Greek refugees who came from Asia Minor in 1922. One storey homes with a front of just four meter bright – and a depth also just four meters. “Do you want to see the old home?” my cousin asks, my aunt and I cheer. “The old home” is the family home of my Asia Minor refugee grandparents from my mother’s side. The home, a 4x4meter square box was given to my mother’s grandmother – a widow with two children – by the Greek state sometime after the Exodus of the Greek refugees in 1922. When my mother’s mother got married, the family bought an additional 4×4 meter refugee home-box standing right next to the old home. This is where my mother and my two aunts were born in the 1930’s. In the 1940’s there were 8 people living in this 4×8 meter home: the two parents (my grandparents), two widowed grannies, my grandma’s brother, and the three daughters.

“The old home” was sold in the 1970’s, soon after my aunt got married. The family moved into another area, close to us. But the old home still stands there – renovated by descendants of the new owner. It stands with all the memories alive.

“There!” my aunt calls my cousin to hold the car and points at the old home.  “They came in the morning and asked for our father and our uncle,” she says and immediately adds with a broken voice “I was shivering, I was shivering, I was so scared. I thought, they would kill my mother and the grannies and my sisters.”

In August 1944, my aunt was 9 years old. “We were six women at home, all sitting close to each other, hugging each other and scared.”

They were “a German soldier with a gun pointing at us, a traitor wearing a hood, and some other men. They were searching for my father and my uncle. My mother told them they had gone to the Square – but in fact only my uncle had done so. My father had fled and was hiding somewhere. I don’t know where. But maybe mother knew. Later people said, he was hiding in some loft in Lefka,” a suburb towards the city of Piraeus.

On that Thursday, August 17th 1944, at 3 o’ clock in the morning, dozens of motorized and dismounted soldiers of the German occupation alongside with  other Germans and Greek collaborators, a total of 2,500 people, raid and surround Kokkinia, and call all men aged 14-60 to go to the main square.

“In the middle of the night… they were going around with megaphones and calling the men from 14 to 60 to go to Osia Xeni square,” my aunt recalls. “They were warning that if they’d find any male in the houses, they’d shoot him immediately.”

Aunt recalls: “The uncle went to the square, the father had left home the previous evening, I think. Had they found them at home, they would have shot them immediately.”

At the same time, small groups consisting of German and Greeks collaborators surrounded a neighborhood and raided homes. Together is the “traitor” wearing a hood so that people will not recognize him.  The “traitor” knows how many males are in a household, who fought for EAM.

“We were all alone, all women and us children. Uncle had gone to the square. Had they found him at home, they would have shot him immediately. We were hearing the shooting from neighboring homes.” 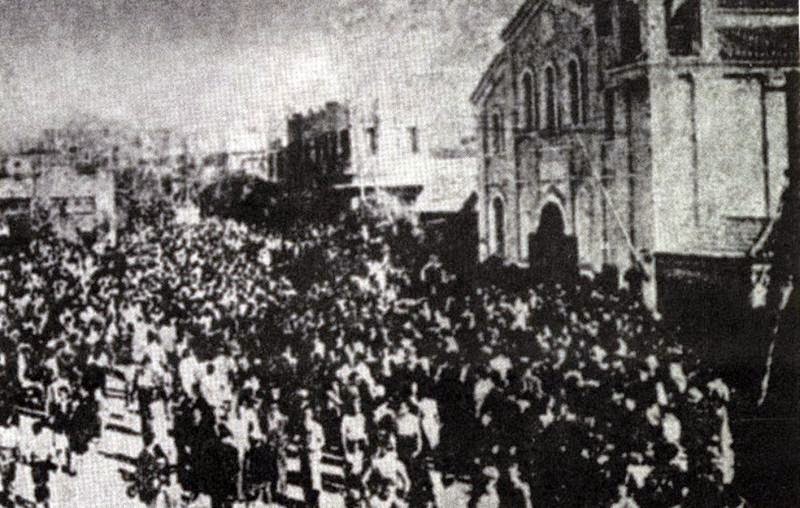 Within a couple of hours, thousands of boys and men – some sources claim 20,000 – from Kokkinia and neighboring suburbs are standing on the main square. Greeks collaborating with the Nazis, Greeks wearing hoods, my aunt calls them “traitors”,  go around accompanied by German soldiers and point out at the several men. At hundreds of men who were allegedly fought together with the communist EAM against the Nazis.

“My father and my uncle did not fight for EAM, but they were supporters of the Left. All the neighborhood, all the Greek refugees from Asia Minor were left,” the aunt says and underlines “there was only one man in the neighborhood who was not left, but right. He was a policeman.”

The “selected” ones are taken to a place called Mantra (Stone Wall), less than 100 meter from the family’s old home. They’re quickly charged of being communists, members of the resistance EAM. They are executed in groups. According to historical sources, 76 EAM officers, 46 men from the Armenian neighborhood and others were executed at the mantra, the stone wall. 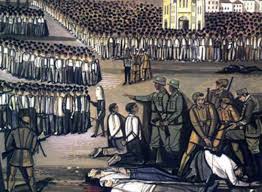 At the same time, 100 houses are set on fire, 4 more people are burned to death.

6,000 to 8,000 men aged 14-60 are being taken “hostages” as my aunt call them and transferred to the military camp of Chaidari at the borders of Piraeus with Athens.

“The men sent handwritten messages to their families, saying I’m here, I’m there. We were crazy from …. Somehow we learned that the uncle was alive in Chaidari. At some point the father returned home. But we were so concerned about my uncle. He was like a second father to us. He was teaching me songs and I used to play with his hair, I used to to stick hair needles on his hair…”

From Chaidari, 1,200 men are being transferred to concentration camps in Germany. “The uncle” is one of them. Kokkinia feels like dying.

“It was the brother of the man who would later be my father in law who informed us somehow, maybe with a little note…  I don’t remember how we learned that the uncle was going to Germany. They were together in Chaidari camp.”

The uncle is 35 years old, a cook. He spends a year in the concentration camp in Mannheim, most probably in Sandhofen, a forced labor camp where prisoners worked for companies like Daimler-Benz. The uncle is assigned to work in the camp’s kitchen.

The family has no sign of him, doesn’t know if he is dead or alive.

“It was during that time that the hair of my mom turned all white. She was a 40-year-old woman back then,” the aunt says.

My aunt remembers the name of the traitor, and that at the end, he was killed by the Nazis. “I’m not sure but I think the Germans threw his body in front of his home. The news spread in zero time and people started to run to his home. Your mother took me and we run to the home of the traitor, too. There were thousands of people gathered there.”

“We [the family] had no losses at the Block but in neighboring homes families lost two or even three young boys. The neighborhood was dressed in black. A mourning without an end. It was our neighbors, our friends, we played with their kids.”

The Uncle returned home after one year, when the World War II was over.

“Dozens, hundreds of people kept flocking to our door each and every day, for a long time,” my aunt stresses. Relatives of men aged 14-60 who were taken to the German concentration camps after the Raid of Kokkinia. “They kept asking Do you know about Nikos X? Have you seen Giorgos Y? Have you heard anything about Kostas Z? They were holding tiny paper notes with names on them. The were desperate.”

Some returned later. Some never.

In the family, nobody liked to talk about the uncle’s “adventure” in front of the children. When my cousins and I were young, we would ask the uncle how comes he went to a German camp. He would reply “Oh, I was sitting in my restaurant and the Germans came and told me Come on, you come with us now.”

The uncle did all he could to forget his horrible awful year in the concentration camp.

The man who used to allow his youngest niece to stick hairpins in his hair and teach her songs had turned into a very serious, bitter, laconic man. My cousins and I were thinking that he did not like children – practically anything that had to do with fun. He was just a broken man with nightmares.

Years later, probably sometimes in the 1950’s, he received a compensation by the state equivalent to some 100 euro or even less.

“We will go all the way, first diplomatically and then legally, if necessary,” Tsipras said during events marking the World War II massacre in the village of Kommeno, in Arta, northwestern Greece. More than 300 people were executed in Kommeno on August 16, 1943, the village was then torched by German occupying forces. 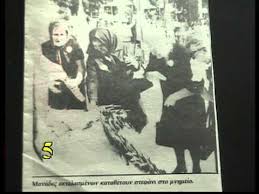 Will the war compensations alleviate the pain for the loss of life, sweeten the bitterness of the uncle, sweep away the feelings of horror that a nine-year-old keeps alive for 72 years?

“War compensations will not bring back the dead. But they will bring justice, a moral satisfaction, for something done that was wrong and cost the lives for so  many people, so many young people,” my aunt says.