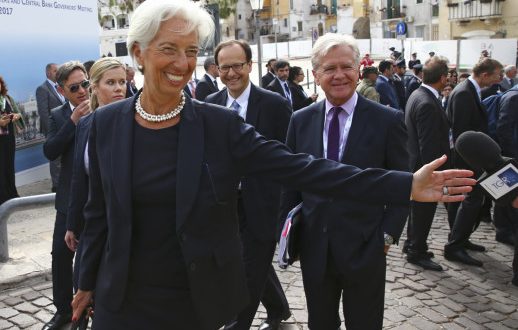 “We will carry on working on this debt relief package,” Lagarde said after talks on the issue on the sidelines of a meeting of G7 finance ministers and central bank governors in the southern Italian port of Bari.

“There is not enough clarity yet but I hope that the European partners will continue to progress in that,” Lagarde said adding that the IMF’s position had not changed in the long-running saga.

“We have two issues, policies which are being voted on now, I hope, by the Greek authorities. Much progress has been made and we certainly hope that the Europeans will be far more specific in terms of debt relief, which is also an imperative,” the chief of IMF stressed

German finance minister Wolfgang Schaeuble, who leads the eurozone, said that the Greek issue was discussed at the G7 Summit although not officially on the agenda.

Schaeuble expressed hope for a political solution at the Eurogroup of May 22.

EU Commissioner Pierre Moscovici reiterated that the eurozone needs the IMF’s participation in the Greek program. He added that “progress have been made in the talks, however he did not elaborate on how the two sides can make …ends meet when Berlin refuses to address the debt relief issue at least before the German elections in upcoming autumn.

They have also said they will consider providing new lines of credit to replace more costly IMF loans, a move that would save Athens billions in interest every year.

Led by Schaeuble, several eurozone finance ministers  are dragging their heels, insisting on more evidence of debt-plagued Greece delivering on reforms as a condition of green-lighting the third rescue package of its kind since 2010.

The rift between IMF and Eurozone delays the conclusion of the second review of the Greek program and consequently the disbursement of the 7-billion euro bailout tranche that will enable Greece to repay loans.

On the other side of the debate, many economists have said a reluctance to write off some of Greece’s debts has been counter-productive because of the negative impact deep cuts on public spending have had on economic activity.

Should the IMF participate in the Greek program, talk has it that the funding will be maximum at 4 billion euros.

PS at the end of the IMF-Schaeuble rift, I see one more bailout agreement  -or Supplementary Memorandum of Understanding in lenders’ official language – coming. And another package of austerity measures. The longer the delay, the highest the cost. Simple things. We have seen them many times since 2010.