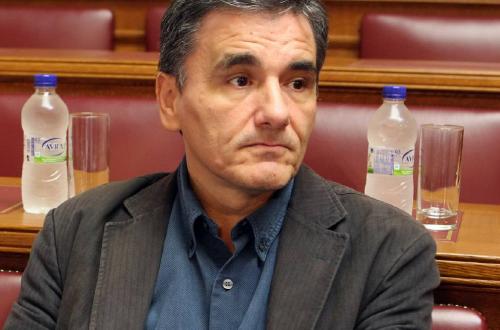 Greece to forego the €7billion bailout tranche, if no debt deal

Athens is willing to forego without the next bailout tranche of 7 billion euros, if there is not debt deal. That’s why the Greek government has put money aside and has not paid its own arrears to private companies. This is why German tabloid Bild writes on Tuesday.

The newspaper which is close German conservatives quotes Finance Minister Euclid Tsakalotos saying “The next bailout tranche is not the problem.”

The Bild report is obviously based on a briefing of Tsakalotos to correspondents of foreign media on Monday afternoon in Athens.

According to Associated Press, Tsakalotos insisted Monday the country had met all its reform commitments, and said it was now up to international creditors to agree on how to make Greece’s debt sustainable and help the nation emerge from its financial crisis.

“There is very little point in entering a (bailout) program if the goal is not to leave the program. And leaving the program should be the responsibility not just of the debtor country but the creditor country as well,” Tsakalotos said. “We’ve done our share of the deal, it’s up to our creditors and the IMF to do theirs.”

The finance minister said there were “no excuses for not getting this overall deal that the Greek economy so desperately needs in its efforts to access the markets and therefore to be able to leave the program as planned in the summer of 2018.”

Citing the Bild report, Athens News Agency writes that the Greek government will pay its own obligations without having to get a new loan.

However, also Spiegel Online notes that “The Greek government does not want to accept an agreement which releases further loans [bailout tranches] without a firm commitment on debt relief.”

Spiegel quotes Tsakalotos saying during the briefing on Monday that “Nobody wants Greece to default, let alone Wolfgang Schaeuble.”

The Greek finance minister expressed optimism over an agreement at the Eurogroup on June 15.

“Bild has distorted what I said yesterday. I have never said that Greece will not repay part of the debt in July. There is no such thing. What I said is that there is no issue with the disbursement of the bailout tranche, because all parties have agreed that we have fulfilled our commitments. However, the Greek Government considers that a disbursement of the bailout tranche without a clear solution to the debt, is not enough to reverse the course of the Greek economy. “

PS As intense negotiations are ongoing in the background, we can see lots of the usual bargaining tactics and blackmails until June 15.