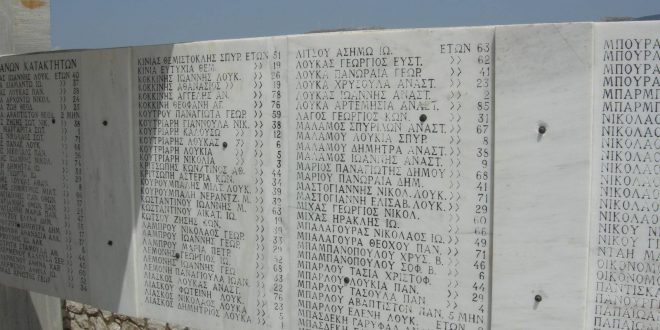 It was a moment of embarrassment for German ambassador, local dignitaries and anti-Nazi hero Manolis Glezos at the memorial ceremony in the village of Distomo where Nazi massacred 218 men, women and children on June 10 1944.

Ambassador Peter Schoof was about the lay a wreath at the memorial, when former SYRIZA Parliament Speaker Zoi Konstantopoulou confronted him with the Nazi past of Germany.

Some among the crowd applauded Konstantopoulou, some booed and shouted “shame!” and “hypocrisy!”

Caught by surprise, the German ambassador found no words. He froze. Some Germans in the audience shouted “Shame!”

It was famous anti-Nazi hero and resistance fighter, Manolis Glezos, who saved the situation.

94-year-old Glezos took Schoof by the hand and led him to the marble memorial where he could laid the wreath. Some people shouted “Bravo, Manolis!”

“I owe an explanation. The child of a perpetrator, no matter what and how many crimes his father, his mother committed, can do nothing about it,” Glezos told the crowd later.

On May 30 1941, together with  Apostolos Santas, Glezos climbed up to Acropolis at night and took down the Nazi Flag. They were later arrested and tortured by the Nazis.

Manolis Glezos is a fervent supporter of reclaiming war reparations and enforced ‘loans’ from Germany.

The Distomo Massacre has gone into history as one of the war crimes committed by the Nazis and the Waffen-SS.

The incident on Saturday triggered a discussion in Greece. Media described Konstantopoulou’s intervention as “unacceptable” and suggested she did it for her own promotion.

After she left SYRIZA in summer in August 2015 due to the 3. bailout agreement, she formed her own political party. She is very active in hindering notaries from proceed with home auctions in courts. She is a lawyer and no longer holds a seat in the Greek Parliament.

The internet community is divided. Some criticized Zoi Konstantopoulou, calling her “populist”, “left-wing fascist” and “ridiculous”.

Others defended her and even congratulated her for making an important point.

Others criticized Manolis Glezos saying he simply diffused the situation without even mentioning the justified Greek claim.

The incident brought back wounds from the past. Many reckoned family members killed by the Nazis. Some wrote that although courts had ruled compensation for their family, they never saw a single euro paid by the German state.

Some noted that “if Germany was not the ruler of the eurozone, the WWII reparations would not be an issue.”

Some said laying a wreath was “a bold action” and that Peter Schoof is representative of the German state. Some stressed that the wreath should have been accompanied with an apology.

Germany refuses to pay compensation not only to victims of Distomo but to any other victims’ families. Neither does it accept to pay the enforced so-called “loans” the Nazis took form Greece during the Axis occupation. Germany claims all WWII damages were settled with a bilateral agreement beginning of the 1950’s.

Konstantopoulou defended her position with a post on her Facebook page. She reiterated that Germany has no right to lay a wreath with the German flag at the memorial after the names of the massacred victims were called one by one. “Germany owes to pay for the crimes against humanity, the holocaust, the destruction, the atrocities” she wore among others.

And you? What do you think? Was Konstantopoulou right? Or Glezos? Should The German ambassador apologize?

There is this word called “reconciliation.”  And I think an “apology” would be very appropriate. However, Ι have to note that I have no idea whether the German ambassador delivered a speech that contained also this magic word.

The German Embassy in Greece was massively tweeting on Saturday about Documenta in Kassel that this year takes place both in Greece and Germany.

Monday morning, a spokesman of the Foreign Ministry in Berlin said, he could not comment on the incident as he “did not have the possibility to speak with the German Ambassador about the incident until now.”

PS I saw not a single Tweet about Distomo. Apparently the German diplomatic representation was not able to deal with such an embarrassing situation that recalled the past many Germans wish the world should erase it from its memory.