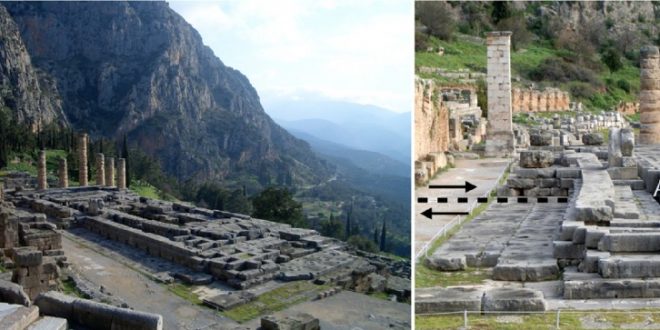 The Ancient Greeks may have built sacred or treasured sites deliberately on land previously affected by earthquake activity, according to a new study by the University of Plymouth.

Professor of Geoscience Communication Iain Stewart MBE, Director of the University’s Sustainable Earth Institute, has presented several BBC documentaries about the power of earthquakes in shaping landscapes and communities.

Professor Iain Stewart believes fault lines created by seismic activity in the Aegean may have caused areas to be afforded special cultural status and, as such, led to them becoming sites of much celebrated temples and great cities.

Scientists have previously suggested Delphi, a mountainside complex once home to a legendary oracle, gained its position in Classical Greek society largely as a result of a sacred spring and intoxicating gases which emanated from a fault line caused by an earthquake.

But Professor Stewart believes Delphi may not be alone in this regard, and that other cities including Mycenae, Ephesus, Cnidus and Hierapolis may have been constructed specifically because of the presence of fault lines.

“Earthquake faulting is endemic to the Aegean world, and for more than 30 years, I have been fascinated by the role earthquakes played in shaping its landscape. But I have always thought it more than a coincidence that many important sites are located directly on top of fault lines created by seismic activity. The Ancient Greeks placed great value on hot springs unlocked by earthquakes, but perhaps the building of temples and cities close to these sites was more systematic than has previously been thought.”

In the study, published in Proceedings of the Geologists’ Association, Professor Stewart says a correspondence of active faults and ancient cities in parts of Greece and western Turkey might not seem unduly surprising given the Aegean region is riddled with seismic faults and littered with ruined settlements.

But, he adds, many seismic fault traces in the region do not simply disrupt the fabric of buildings and streets, but run straight through the heart of the ancient settlements’ most sacred structures.

There are prominent examples to support the theory, such as in Delphi itself where a sanctuary was destroyed by an earthquake in 373BC only for its temple to be rebuilt directly on the same fault line.

There are also many tales of individuals who attained oracular status by descending into the underworld, with some commentators arguing that such cave systems or grottoes caused by seismic activity may have formed the backdrop for these stories.

“I am not saying that every sacred site in ancient Greece was built on a fault line. But while our association with earthquakes nowadays is that they are all negative, we have always known that in the long run they give more than they take away. The ancient Greeks were incredibly intelligent people and I believe they would have recognised this significance and wanted their citizens to benefit from the properties they created.”

The full study – Seismic faults and sacred sanctuaries in Aegean antiquity – is published in Proceedings of the Geologists’ Association, here

“The ancient destructive capability of earthquake faults is well chronicled by historians and their cultural impact widely uncovered by archaeologists. Archaeological and geological investigations at some of the most renowned sites in the ancient Greece world, however, suggest a more nuanced and intimate relationship between seismic faults and past human settlements. In the Aegean’s karstic landscape earthquake fault scarps act as limestone ramparts on which fortifications, citadels and acropoli were constructed, and underlying fault lines were preferred pathways for groundwater movement and egress. The vital purifactory or therapeutic role of natural springs in the ritual practices of early settlements implies that the fault lines from which they leaked may have helped position the nascent hubs of Greek cities. Equally, the tendency for earthquakes to disrupt groundwater patterns and occasionally shut down persistent springs provides a hitherto unrecognized mechanism for the abrupt demise of those same settlements. Votive niches, carvings, reliefs and inscriptions on fault surfaces suggest important sacred sanctuaries, particularly those with oracular functions, may have been deliberately built astride active fault traces and venerated as direct connections to the chthonic realm (‘the underworld’). Regionally, the Aegean’s distributed network of tensional faulting, circulating geothermal waters and deep-seated de-gassing sets the tectonic framework for the springs and gases that infuse the ancient Greek netherworld of caves, chasms, chambers, and sacred grottos. The possibility that seismic faults may have constituted the fulcrum of prominent sacred places means that, for all their obvious destructiveness, earthquakes may have had an unacknowledged cultural significance in Greek antiquity.”

The formidable ‘Cyclopean Walls’ of the hillltop citadel of Mycenae are built atop metre-high limestone fault scarps, with the southeastern one bordering the famed Lion’s Gate entrance (a) and the northeastern one that lies along the line of the sacred Spring (b).

(a) General view of the Temple of Apollo at Delphi, and (b) a close-up showing its inner walls markedly bent at its intersection with the trace of the inferred cross-fault. The implication is that the oracular chamber below the temple complex lies on a line of minor fault movement.