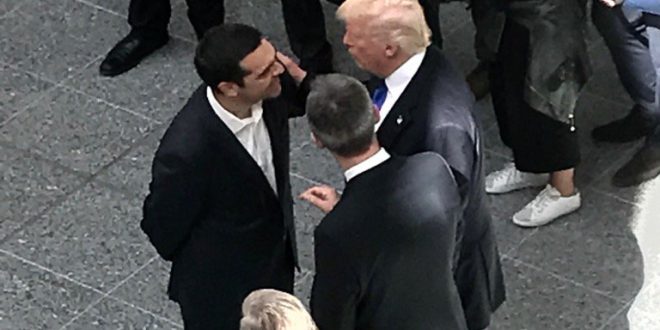 September 29, 2017 Greece, Politics Comments Off on PM Tsipras to meet US President Trump at the White House in 2nd half of October 444 Views

Greek Prime Minister Alexis Tsipras is to pay an official visit to the United States following an  invitation by President Donald Trump.

The visit is expected to take place in the second half of October, most probably the two leaders are to meet on the 17th of the month, Greek media report on Friday.

The White House is yet to issue the official statement about the exact date of the visit.

Citing diplomatic sources in Washington, migratiou.com notes that President Trump is not expected to announce any “dramatic change on the issue of the Greek economy but he will definitely stress and need for investments” in Greece as well as for “debt restructuring.” One more issue for which Americans have a strong interest is the naval base of Souda on the island of Greece, the website adds.

Tsipras and Trump had a short conversation during the NATO Summit in Brussels end of May.

“I am following you,” US president Donald Trump told Greek prime minister Alexis Tsipras during a short face to face meeting they had at the NATO Summit..

“You are recovering and that’s great!” the US president reportedly said further and added

“Greece is a wonderful country with wonderful people.”

Donald Trump has been praising Greece and the Greeks on several occasions and events. But so far, Greeks have not seen anything ground-breaking, neither an visible support other than a Hurray-phrase here and there.

PS With Europe aiming to create its own Monetary Fund  and Greece supporting the idea to abandon “dependency from the IMF,” the visit may turn not so sweet as expected. On the other hand, all is a matter of bargain… 🙂